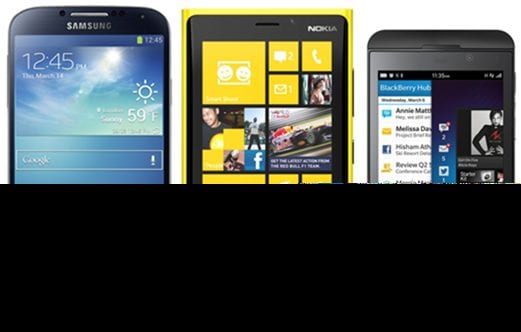 Samsung has once again set a new standard for high-end smartphones after announcing its flagship for this year, the Galaxy S4. It is, thus, normal that new devices are being compared with it. In this post, we will try to compare Nokia’s top contender, the Lumia 920, and Blackberry’s comeback device, the Z10, with the Samsung Galaxy S4.

Instead of going into each device’s full specifications, let’s try to compare their displays, memories, camera sensors, processors, operating systems and batteries. These are the components that matter most to a lot of users.

The Samsung Galaxy S4 is blessed with a 5-inch Super AMOLED display with full HD resolution. That would give users around 441ppi pixel density and that means that the picture is clearer, more colorful and sharper. Of course, multi-touch is supported plus an added floating touch feature that many would eventually love.

The display that’s even smaller than Lumia 920’s is Blackberry Z10’s. It measures up to 4.2 inches but has the same resolution as Nokia’s flagship. Since it is a bit smaller, it is denser at 355ppi.

Clearly, the Galaxy S4 dominates in this aspect.

Both the S4 and the Z10 have 2GB RAM and come with a microSD card slot that supports up to 64GB or external memory. The former will be distributed in three variants (16GB, 32GB and 64GB), the latter will only be sold with 16GB built-in.

On one hand, Lumia 920 only features 1GB of RAM without the possibility of expansion because there’s no microSD card slot. Users are stuck with a device with only 32GB built-in memory.

Nokia boasts of its PureView technology and Carl Zeiss optics. So, despite having 8-megapixel camera sensor, the quality of the images and pictures it produces are pretty good. For this device, photography is one of the selling points and it’s working, at least, for Nokia.

The Blackberry Z10 also has an 8-megapixel sensor for better quality pictures. The company, however, didn’t really highlight its importance during the announcement. It is understandable that BB devices was never really promoted for capturing photos but through better security, efficiency and productivity…well, at least, that’s what the company boasts a couple of years ago.

The Galaxy S4 features a 13-megapixel sensor plus a bunch of new features that make use of the camera. You could never go wrong with a sensor of this caliber but users should know the South Korean company wasn’t really known for promoting photography for its devices. Rather, it is more concerned of the power its flagships may offer.

Both the Lumia 920 and BB Z10 are using Qualcomm MSM8960 Snapdragon chipset with 1.5GHz dual-core Krait. Make no mistake, this processor is more powerful than you think but Qualcomm has just released a new chip that’s even more powerful. Basically, the MSM8960 appears a little dated for 2013.

The Galaxy S4, on the other hand, features the company’s Exynos 5 Octa 5410 chipset with two sets of quad-core processor. One set is for processes that require more power while the other does the housekeeping by keeping low processes working. Reports suggest the phone will be using Qualcomm Snapdragon 600 in other regions but Samsung has yet to make a statement about that.

Samsung’s flagship boasts being one of the few devices that will be released natively running the Android 4.2.2 Jelly Bean OS. On top of the features of the latest version, Samsung has given the phone a lot of features, too.

The Lumia 920 operates on Windows Phone 8. The OS is great, there is not just a lot of apps users can download, at least, for now.

The Z10 will run on Blackberry 10 OS. It is the last chance for the company to bring itself back to profitable state. So far, the OS received a lot of good feedback but that’s not really enough to make it wanted by enthusiasts.

Perhaps one of the reasons why Samsung put a monster battery of up to 2600mAh in capacity is because the device naturally eats up a lot of power. So, we believe that the power it stores is just enough for the device to get powered less than 10 hours of straight usage.

The Z10 has 1800mAh battery but according to reviews, it can reach up to 10 hours of straight usage. One of the factors that would help batteries last longer is the consistency between the software and the hardware. So, we believe that BB Z10 has few issues.

The Lumia 920, however, has a bit higher battery capacity at 2000mAh that could also reach up to 10 hours of straight talk time over 3G network.

When compared with these two devices, Samsung Galaxy S4 will come out dominant in all aspects. Again, it has become the benchmark of high-end smartphones and it just follows it would bit every competitor that might compromise its sales. Perhaps, the closest rivals for the S4 this year is LG Optimus G Pro and iPhone 5S.