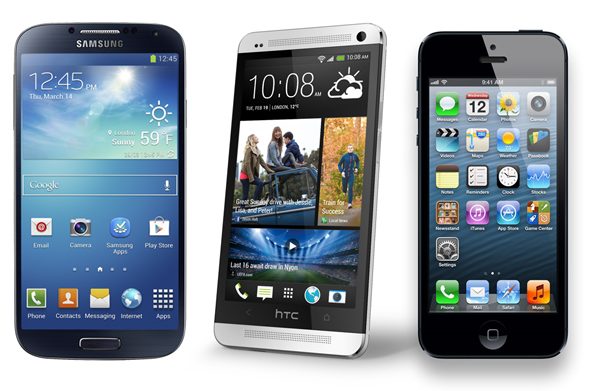 Both Samsung and HTC have announced their flagships for 2013 leaving Apple the only tough contender that hasn’t revealed what its plans for the next generation iPhone (5S) are. So, for this post, we will try to compare the Galaxy S4, HTC One and iPhone 5. Let’s see which one gets the upper hand as far as specs competition is concerned.

Display – The Galaxy S4 is equipped with a 5-inch Super AMOLED display with full HD (1080 x 1920 pixels) resolution giving about 441ppi pixel density while the HTC One has 4.7 inches screen with the same resolution, Super LCD3 technology and 469ppi. The iPhone 5 comes with Apple’s popular Retina Display technology with 1136 x 640 pixels resolution stretched on a 4-inch display with 326ppi. Display is not really about how wide the screen is, rather it’s about which technology provides clearer picture and remains energy-efficient.

Processor – Samsung’s flagship would become the first mobile device to sport an octa-core processor in the form of Exynos 5 Octa 5410 chipset. But just to clarify, all 8 cores don’t function simultaneously; one quad-core will execute high-performance processes while the other set will keep the phone running. HTC’s flagship, on the other hand, sports Qualcomm Snapdragon 600 chipset with quad-core processor clocked at 1.7GHz; majority of flagship phones this year will use this chip. The iPhone 5, as we know it, only comes with a dual-core processor—Apple A6 chip.

Memory – Both Samsung and HTC have given their flagships 2GB of RAM each while Apple’s has 1GB. The iPhone 5 is known to have the smoothest user experience despite the fact that its specs are not really on par with other high-end devices. Imagine an Apple device having the same specs as with the One or the S4.

Camera – HTC announced earlier this year that it will deviate from the typical sensor competition. The One comes with 4-megapixel sensor but uses the Ultrapixel technology to bring better and high quality photos. The S4 is blessed with 13-megapixel sensor and a lot of new camera features. The iPhone 5, although it only has 8-megapixel camera, is still competitive in this aspect.

Battery – Samsung seems to dominate in this aspect with a battery that could hold up to 2600mAh, followed by HTC with 2300mAh and of course, the Apple with 1440 mAh. But do you know what’s amazing? These devices could last just as long. Apple did a great job in keeping its hardware and software consistent so power couldn’t be wasted. Samsung, on the other hand, is known for giving its devices huge battery packs but the Super AMOLED display and high performance processor could eat up a lot of power, too.

OS – One way to attract enthusiasts is by packing the device with updated and latest software; that’s what Samsung did for its flagship. The S4 operates on Android 4.2.2 Jelly Bean but many were actually expecting for it to run on Android 5.0 Key Lime Pie as rumored. The HTC One has version 4.1.2 but once released, an update may be rolled out shortly. The iPhone 5, of course, can be updated to the latest version of iOS. At the time of this writing, the iOS 6.1.2 is the latest version for it.

It is almost unfair to compare the iPhone 5 with Samsung’s and HTC’s flagships for this year. However, it is also one way to show that Apple’s 2012 flagship can stand in competition against these new smartphones. Let’s wait and see what the company has in store for us. As for Samsung and HTC, good job for building powerful devices like the S4 and One.