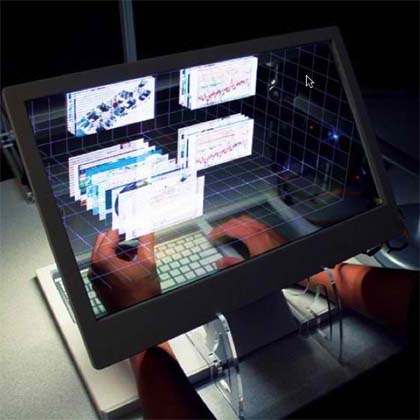 The Massachusetts Institute of Technology graduate student Jinha Lee revealed one of the new innovations Microsoft has in store for tech enthusiasts—the SpaceTop 3D Desktop, which is a 3D computing environment that allows users to reach into and manipulate data the way they want.

Lee already had a vast knowledge in terms of 3D modalities because before he engaged into the SpaceTop 3-D project, he developed a levitating 3D ball called ZeroN that could record videos and replay them in a manner the user moved it around. While the SpaceTop 3D is a whole lot different from his previous project, it was the foundation of his knowledge for 3D manipulation.

The SpaceTop 3D desktop was developed during and after Lee’s internship at Microsoft Applied Science. Users can operate the machine by reaching out for data like web pages, videos, and documents like they are real world objects. They can be manipulated the way users want like playing videos, enlarging and fast-forwarding them, etc by simply doing a hand gesture. The SpaceTop 3D also scans the user’s eyes and interpret gazes made to automatically adjust perspectives of the projection.

Since gestures and eye gazes are required to execute most of the commands, there are two camera sensors put into the device. One is used to scan user’s hands and interpret gestures while the other scans the eyes to analyze gazes. The new technologies that were used in this device may still be in their early stages, although the gesture-based technology is not actually new to the people.

The new innovation from Microsoft, however, will pave a way for more 3D gesture-based computers in the future.

According to Jinha Lee, his team is still in the process of integrating as many 3D modalities and manipulation commands as of the moment. There wasn’t any information provided when the device would be released or whether or not the company will build many of its kind for consumers.