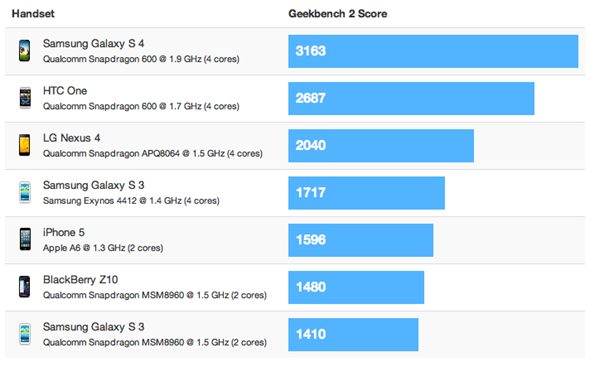 Ever since the Samsung Galaxy S4 was officially announced, the web has been flooded with comparison articles placing the flagship head-to-head with smartphones from other manufacturers. Of course, benchmark scores were part of such hype and just recently, Geekbench scores emerged showing the device being on the top spot.

The Galaxy S4, with Qualcomm Snapdragon 600 processor, sits comfortably in the first place with an overall score of 3164 (the higher, the better). It was followed by HTC One, with 2687. Considering both devices use the same processor with a slight difference on the clock-speed, there is a huge gap between their performances.

On the third place LG Nexus 4 with an overall score of 2040, then the Exynos 4-powered Galaxy S3 with 1717. Between these devices, we could see that there is a considerable difference in their performance, which adds to speculations that Qualcomm chipset are always better than Samsung’s.

In the fifth place was Apple’s iPhone 5 with 1596. Apple devices are not really known to sport too high specifications, rather they are more balanced in both software and hardware. However, the score showed the Galaxy S4 is twice as fast as it is. Or, at least, it implies Apple would have to build iPhone 5S twice as fast as the iPhone 5 to be able to equal with the power of the S4.

The sixth and sevenths spots were occupied by BlackBerry Z10 and Galaxy S3 (dual-core variant), which got scores of 1480 and 1410, respectively.