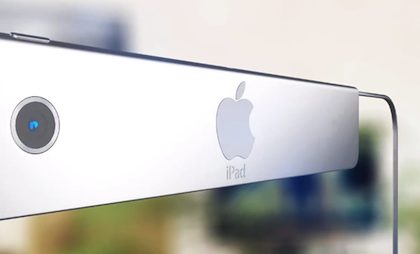 Concepts of feature iPads are a dime a dozen. Sometimes, however, once comes across our desks that catches our eye. This one, designed by Ricardo Afonso, is an iPad that is completely transparent. Could this be the future of the iPad or is it just a designer’s dream?

The concept shows a blank, clear slate with iPad icons on the glass surface. It also has a home button and an area that holds the cameras. The areas with the cameras and the home button is not transparent like the screen. Interestingly, the icons are only projected on one side of the screen, so as to protect whatever the user is looking at. If that is technologically (or physically) possible, it would be really cool tech.

The problem with this render, like every other transparent screen concept, is that you can see things behind the screen. Your fingers would get in the way, and it would be very distracting to see things behind the things you are looking at on the screen. This concept, if it were possible, would require major advancements not only in display, but also in battery technology since it would have to be in one of the two non-clear spots, both of which are very small.

Overall, it is a neat concept but not all that realistic. Even if the technology comes into existence (clear screens are already possible), would Apple design something like this? Apple has a tendency to focus on usability with their products. The fact that a user could get distracted while using the product might turn Apple away. Also, it is unlikely that batteries that would be that small will be that efficient, at least any time soon.

What do you think? Would you buy an iPad that looks like this? How usable would it be? Talk back in the comments below!