5. Firth of Forth Bridge

A bridge has to be extremely sturdy if it’s meant to support hundreds of trains every day and this impressive structure is one such bridge. The first bridge to be constructed mainly out of steel – an estimate of 54,000 tons! – and held together with more than 7 million rivets, the Firth of Forth certainly is one strapping structure. 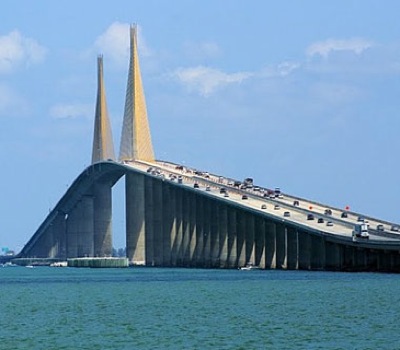 This next bridge stretches on for 4 miles and happens to be the 5th-largest cable-stayed bridge in the world. To ensure that the support columns of the bridge will not be easily moved or destroyed by impacts from passing boats, 36 “dolphins” were included into the building of this stunningly large and long structure.

Not as large as the Zakim bridge in terms of width, but the Akashi Kaikyo bridge is still so humongous, it is able to accommodate 9 million cars per year on its 6 lanes of freeway. And given the fact that it was built under some of the most severe weather conditions in the world, this bridge is one that can’t and will not be moved.

If you’re trying to imagine just how long the Golden Gate Bridge is, picture this: 40 jumbo jets parked end to end; this bridge is not colossal, it’s super-colossal! Serving as a connection between San Francisco and Marin County, this majestic bridge was completed in 1937 and raked up a cost of $26 million.