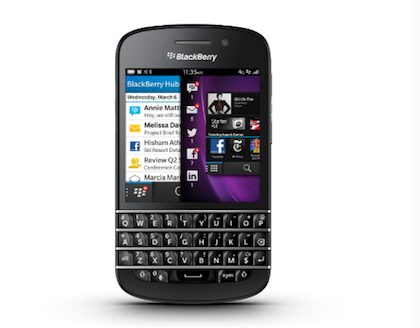 The one thing that BlackBerry is known for is their keyboards, so it is no wonder that they alongside their new Z10 flagship device, they have also unveiled the Q10, which sports their awesome QWERTY keyboard.

The device itself sports a 3.1-inch (720 x 720 pixel) 330PPI display, dual-core TI OMAP 4470 1.5GHz processor, 2GB of RAM, 16GB of internal storage, and a Micro-SD slot. It also runs their brand new BlackBerry 10 operating system, which is totally redesigned and recoded. The OS is meant to get rid of the in and out feeling that other platforms are known for, and supposedly promotes fluidity by using gestures.

There’s no word on availability and pricing at this point, though it looks like the BB10 devices will be launching in the UK and Canada in the next week, and the US in March.

The Z10 and the Q10 are BlackBerry’s last chance to get back what they once had, market relevance. The question is can they compete with a market full of cheap Android devices and the iPhone, both of which have large ecosystems not only of apps but also music, movies and TV shows.