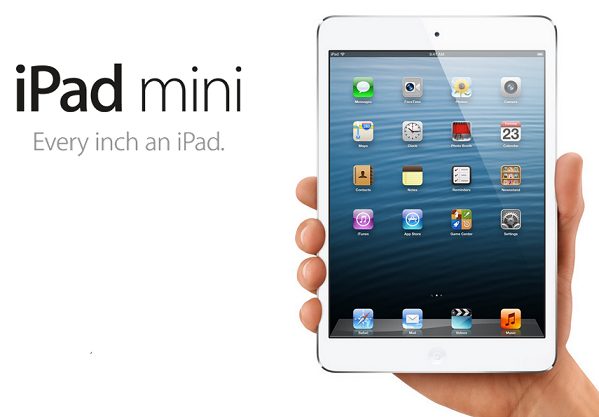 It’s been rumored for so long with so many guesses on when it would finally be revealed, or if it even existed at all, but now all that doubt and uncertainty is over. Phil Schiller has taken the cover off of the first-generation iPad Mini; so, it’s time to take a look what rumors turned true and see what surprises we have in store.

At 7.9-inches at the diagonal, the iPad Mini is the thinnest and lightest tablet device on the market now. It maintains the same resolution as the iPad 2 at 1024×768, and it is only 7.2-mm thin and weighing just 0.68 pounds. This is a truly incredible device that will make you rethink choosing any other brand of tablets.

The iPad Mini comes loaded with the dual-core A5 chipset like that found in the iPhone 4S and iPad 2, which is plenty to run the tiny display and keep the graphics up to par. It has the same LTE support as the iPhone 5, so you never have to worry about your data speed no matter where you roam, and it uses the latest a/b/g/n 802.11 Wifi receptors to make sure your home or office Internet is used at maximum efficiency.

You can capture all your life events using the iPad Mini’s 5-megapixel iSight camera, just like the hardware found in the 3rd-generation iPad and iPhone 4, and have the ability to shoot 1080p video as well. This all new tablet will using the recently introduced Lightning connector to keep you charged and ready to bring with you everywhere you go, and you shouldn’t have to worry about battery life as the iPad Mini maintains 10 hours of usage, which should last you the entire day.

The tiny tablet will come in black or white, like the iPhone or iPad, however it will also have a slate back for the black model, like that of the new iPhone 5. You can get it in 16, 32, or 64GB varieties, and pricing starts at just $329, a small amount for an amazing device — Pre-order information here.

Will you be picking one up as soon as possible, or are you satisfied with what you already have?