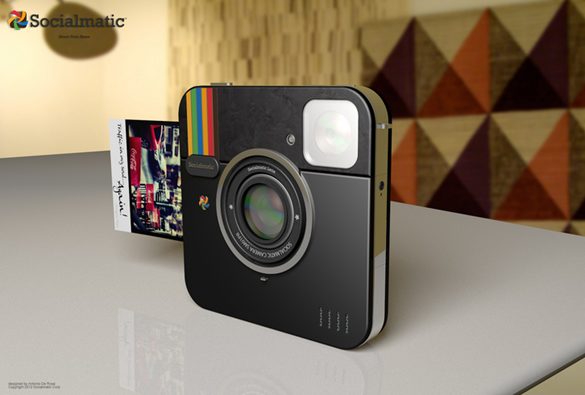 Even after Facebook’s billion dollar purchase of this amazing start-up company, Instagram has remained a popular photo filter and sharing service. Anyone with an iPhone or Android smartphone can take a picture, spice it up with a filter and center focus, and share it on Facebook, Twitter, or just their Instagram page. Now it looks like you may be able to do all that and instantly print your photo with this concept-made-reality Socialmatic camera.

This nifty-looking point and shoot definitely has one of the most unique designs compared to any other camera on the market. It should sport a 4.3-inch touchscreen, optical zoom, and an LED flash to capture the perfect 1:1 ratio picture as used in the current app, although there is no word on the resolution of the screen yet; there has been no details about the size of the sensor as well. It should come in 16GB and 32GB models with connectivity options of either Wifi only or WiFi+3G to share your photos through the various social media outlets, email, or even MMS. The camera will be running a customized version of the Android OS, much like Samsung’s Touchwiz UI or HTC’s Sense interface.

The really unique feature of this new device is the option to instantly print your photo from the camera itself, rather than having to plug into an external printer. The pictures will have an adhesive back and a QR code on the front when printed to allow the photographer to just place their art anywhere for others to see and find more of their work by scanning the QR code. So not only will your Facebook feed and Twitter timeline be full of filtered photos but so could your local Starbucks and other hipster populated areas.

So do you see yourself shelling out the money to buy this exceptional, square point-and-shoot or does the Socialmatic sound like another indie fad that will fade away just as quickly as it came about?