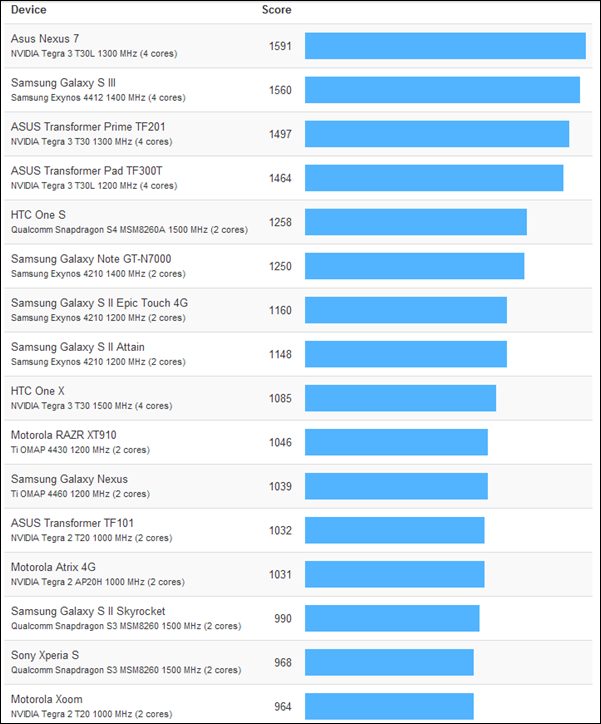 The iPhone has always been a celebrated device by most users but how do you measure overall greatness in a smartphone or tablet? That is what Geekbench is for; it measures performance for processor integer, floating point, memory, and memory bandwidth. A couple days after the big reveal of the iPhone 5, Geekbench posted their results for Apple’s latest smartphone with a score of 1601.

This score is incredible for a smartphone, especially a dual-core one at that. You can see the breakdown of the score above, and below are the results for the past few generations of iPhones and iPads. The iPhone 5 scored more than double that of the third-gen iPad and blows away the results of the iPhone 4S. The A6 chipset found in the new iPhone is a dual-core 1.02GHz processor with 1GB of RAM packed into it. The latest iPad packs an A5X chip is also a dual-core chip with 1GB of RAM as well but, apparently, Apple’s more personal touch to the A6 seems to be quite impressive for the Geekbench crew.

Now it’s one thing to top your own devices but what about the competition? Well Apple is even beating the latest quad-core devices that Google and it’s manufacturers have to offer; from the results below, you can see the iPhone 5 beating out the Nexus 7 (which boasts quad-core CPU and 12-core GPU), the Samsung Galaxy S III (quad-core as well), HTC OneX (quad-core), and Galaxy Nexus (another dual-core device).

These devices are all running a variety of Tegra 3, Snapdragon, Exynos processors found in most top-line Android devices, but it is Apple’s mix of control over hardware and software that make it the greatest creator of consumer mobile devices and computers.

Do you think the iPhone 5 will live up to such high expectations now that it has sold over 2 million units in one day? Let us know your thoughts in the comments below.