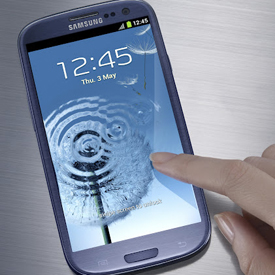 Galaxy SIII has been positioned by Samsung as the best Android smartphone on the market, and the major competitor to the Apple iPhone 4S. It combines impressive hardware with unique software and services such as a 50GB drop box. Software features S-Voice which is the equivalent to Apple’s Siri in the iPhone, though not as amusing.

The first thing that hits you is the stunning display screen, and for many people this must be the phone’s best feature. It is 4.8 inches with a pixel resolution of 1280 x 720 and has a brilliant colour rendition. The colours are very deep, and are adjustable for saturation and contrast. The touchscreen is also very responsive though not overly so. Scrolling is unbelievably smooth too.

The display works beautifully with the main camera. This has an 8 megapixel sensor, which is fairly similar to the camera used in the SII though with a few upgrades. For instance, the new camera has essentially zero shutter lag, it can operate in burst mode, and it has a best shot option. Still shots can be reordered in 3,264×2,448 pixels, and full HD video can be shot at a resolution of 1,920×1,080 pixels. You can also record high definition still shots whilst recording video. There is also a 1.9 megapixel front facing camera for video conferencing and Skype.

There are some subtle differences between the technology used for the displays of the Galaxy S 2 and the Samsung Galaxy S 3. The SII had a screen size of 4.27 inches and a resolution of 800 x 480 pixels, though it incorporated sub-pixels and the technology was designated Super AMOLED Plus, with the Plus referring to the extra sub-pixels. In order to achieve the higher pixel density on the SIII, the sub-pixels have been left out and the technology is now designated as HD Super AMOLED without the Plus. Whatever the boffins did they pulled it off – the display is not just the best thing about the Galaxy SIII, it is probably the best phone display on the market.

Telemedicine as a Workaround to Abortion Regulations, and More News