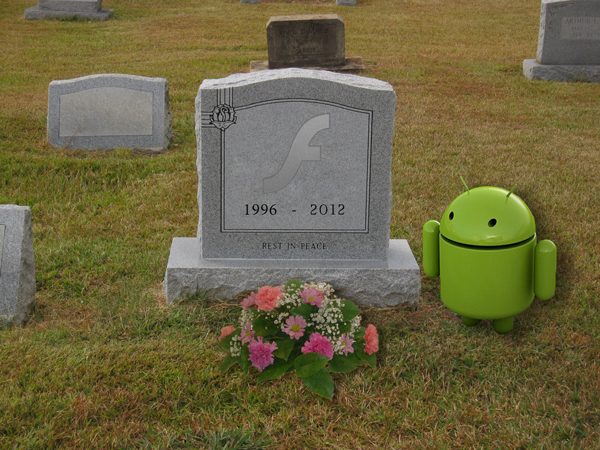 Adobe put up the good, long fight to keep Flash for mobile devices but now it’s time to say goodbye. The web animation platform has effectively been shut down by Adobe, cutting off all downloads to all mobile devices, about 9 months after announcing the freeze in development. It now looks like Android’s biggest advantage has been ripped from it’s cold, robotic hands.

Flash has officially been in existence since 1996, the dawning of web development and web tools, and has been at the forefront of creating dynamic looking web pages across the World Wide Web; at least until HTML5 was born in 2004. Taking seniority, Flash remained the primary tool for web animation and application building while HTML5 was experimented with here and there with limited browser support to make it practical for consumer use.

The tipping point for Flash came when the iPhone was released in 2007 and Steve Jobs refused to allow Flash on mobile Safari, seeing the potential of HTML5 in mobile browsers. This cost Adobe a huge portion of the mobile consumer market and developers started to use HTML5 more to reach a bigger audience. Then browsers started supporting more HTML5 standards (not including all iterations of Internet Explorer) and developers saw the flexibility and power this new web standard had to offer.

Flash got a boost with the introduction of Android 2.2 Froyo but it wasn’t enough; Android has pulled back from Flash with the introduction of Jelly Bean and Project Butter, creating a much more fluid web browsing experience. Even Microsoft is keeping it’s distance from the dated application with Windows 8 offering limited Flash support. So Adobe has now pledged its support to HTML5 and has started creating tools for this new standard like Adobe Edge. So farewell Flash, you’ve served your purpose but no it is time to slip away in piece and let the newer standards shine.