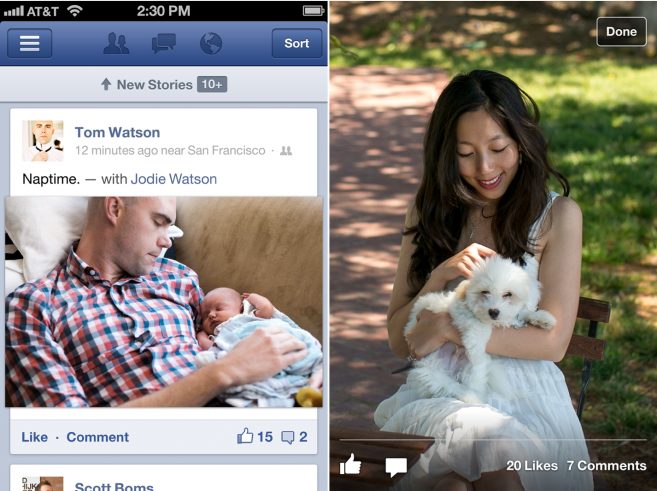 It used to be something we couldn’t live with and couldn’t live without, the Facebook app for iOS was so chunky, clunky, and all around a pain to use when checking on notifications, looking at pictures, and trying to comment on absolutely anything. Thankfully, the Palo Alto company has learned their lesson and released a native update to replace the HTML5 junk that has existed since version 1.

This major update apparently took 6 months to culminate for today’s release, thus it is tailored for iOS 5 (although iOS 6 is on deck to be released quite soon) using Apple’s iOS SDK. Along with with a fantastic amount of speed improvements, the new app has a few UI tweaks as well on the news feed and photo view, finally allowing real fullscreen with the “like” and “comment” buttons tucked away in the corner. Although it is uncertain if some of these speed improvements are result of just decreasing animation times to make the gestures seem snappier, nonetheless this app has become much more usable.

It is unfortunate that this upgrade comes with a few concessions, as is sure to happen with any application going from HTML5 to native and vice versa. The major advantage of HTML5 was the consistent push of updates to repair any bugs that may appear in the multiple Facebook mobile versions. Now the developers will have a little more choosey in pushing updates to the iOS app, but hopefully, with native control, there will be less need for the daily updates needed to keep everyone satisfied.

There are plans to push native versions of their mobile app to the other platforms but it comes at no rush, as a minor update rolled out to Android today as well. While the iOS improvement may be a little harder on the Facebook developers, it will definitely have more people enjoy using it.