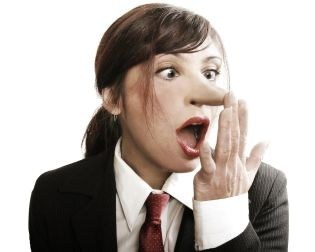 It is said since long that woman is mysterious and enigmatic. You can never find out what’s going in the mind of a woman. If you are thinking that she will never lie to you then perhaps you are very wrong.

Women do lie and this is the truth of life. These lies may vary from simple white lies to great secrets. She may be lying to cover herself or protect your feelings, however you should be beware of such lies. Here is the list of Top 10 lies women tell men.

Normally you will get to hear this alot from a woman’s mouth once the argument is over. Obviously, it doesn’t imply that you are actually right. Even if she is at fault, there are slim chances that she will admit it. In fact, these words are a polite way of saying shut up.

It’s a known fact that women prefer men who are financially sound and independent. It’s not that they only like super-rich men, but they prefer men who can fulfill all their materialistic demands and can provide them comfortable and luxurious lives. Thus, if you find her fantastic then be ready to shell out some money on her.

3. “It doesn’t bother me when you check out other women”

Women often use this sentence. However, they don’t mean it. Every woman wants that her husband or boyfriend look and admire her only. When she is saying this, she is just pretending to be open minded and casual. However, in majority of the cases she is actually upset that you are admiring another lady more than her.

4. “I wouldn’t change a thing about you”

She is right she would not change a thing about you, rather change everything about you. There are many things that she will like to change about you from your eating habits to dressing sense to way of talking and thus you should be prepared of the same.

It is another lie which fools a lot of men. In majority of the cases, she will still have a soft corner for her ex and will like to be in touch with him too. It’s just that she doesn’t want to admit in front of you about her feelings.

Even if she did not enjoy having sex with you, she will not say it bluntly on your face. It’s hard for a woman to admit openly, especially in some cultures. Thus, instead of believing what she is saying, you should observe her body language.

Women are shopaholics and they end up spending a lot of money on shopping. If you listen to them, they will say that almost all the dresses she owns were on sale and that’s why she bought it. However, we all know what the truth is.

She will keep on saying this for an hour while getting ready. When she says this, it means that she is getting ready and it will take some time for her to actually get ready. In the meanwhile, she expects her partner to be ready and waiting for her.

Basically she wants you to pamper her more and initiate the romance process. Women expect men to take initial steps of courtship or lovemaking. They also say this to limit your expectations for the time being.

Even if she says this, don’t dare to do it. These words imply that she is highly pissed off with you and doesn’t care a bit about what you think on a particular issue. To control this situation, you need to be nice with her and show her a more polite and humane face.

Is Mars' Methane Spike a Sign of Life? Here’s How We’ll...

GizmoCrazed - June 24, 2019 0
Last Wednesday, the Curiosity rover detected in Mars’ atmosphere a high concentration of methane, a gas which is usually associated with microbial life on...

HypeHop is a product to fix sponsored videos

Sprint iPhone 4S Will Be Available For Pre-orders On Oct. 7...