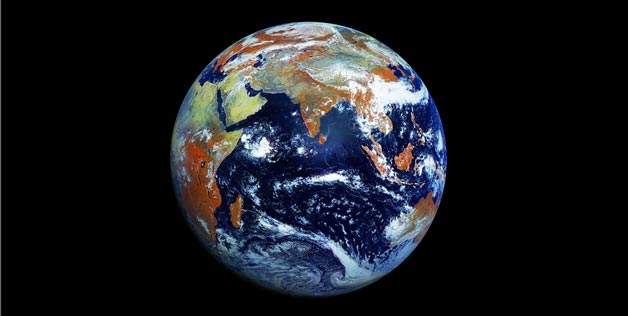 You might’ve seen a lot of pics of the big round planet on which we live, the Earth. Even Google-ing it might give out millions of images, but no pic will be more detailed than the 121-megapixel image of Earth recently captured by a Russian Satellite.

The satellite, known as Elektro-L No.1, took this image from its stationary point over 35,000 kilometers above the Indian Ocean. This is the most detailed image of the Earth yet available to human beings, just because it captures the Earth in a single shot with 121-megapixels unlike NASA satellites, which usually use a collection of pictures from multiple flybys stitched together. The detail in the pic is just amazing, with everything visible so clearly.

James Drake, an educator collected 350 full-resolution photos from the NTs OMZ (Russian Research Center for Earth Operative Monitoring) to make a full video of a day of life on Earth, as seen from the Space.

You can have a look at the video below:

One day perhaps we might have such a detailed image of the earth, through which we can zoom to see our own house. Technology has certainly advanced a lot!

GizmoCrazed - February 11, 2019 0
Foot Locker, the mostly mall-bound retailer of mass market sneakers, has invested $100 million in the sneaker marketplace and retailer of primarily rare and...

Scientists Grow A Whole Organ Inside An Animal For The First...