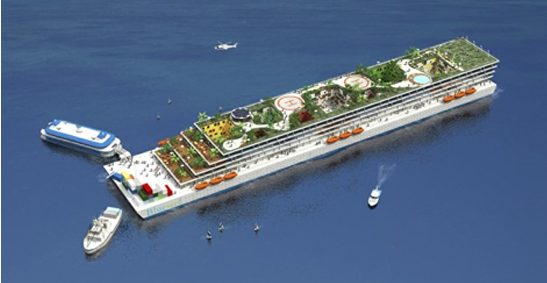 Have you ever considered living permanently on a luxury barge on the sea or (even better) a floating city? Well, if you haven’t, here’s a chance for you.

Co-founder of Paypal, Peter Thiel is investing to build a luxury floating barge that promises to be an entrepreneurs’s permanent home without being a part of any country.

Though offshore, this ship would not be much far away from land, only half an hour or so away from the city of tech, Silicon Valley. So even in case of emergency, help can be delivered to it almost instantly.

This mini-city would accommodate working and living spaces as well as outdoor areas like sports courts and parks. So you can spend a long part of your life here without feeling the need to go to land. Blueseed goes as far as calling this entrepreneur’s and start-up’s primary home.

We don’t know yet about the capacity of humans it would hold, though entrepreneurs and startups can apply to be considered for a place on this barge, paying roughly $1,600 per month to live and work on the massive barge. That’s really not bad considering that this will be a complete floating city filled with most of the luxuries a human wants.

Blueseed says that around 675 individuals from over 50 countries have already agreed on coming aboard this floating city. The best thing about living on it is that you won’t need to apply for a visa from any country, as this ship, despite being in U.S seas, wouldn’t be part of any country of the world.

So, would you live on this? We, being entrepreneurs would be extremely pleased to live on this.