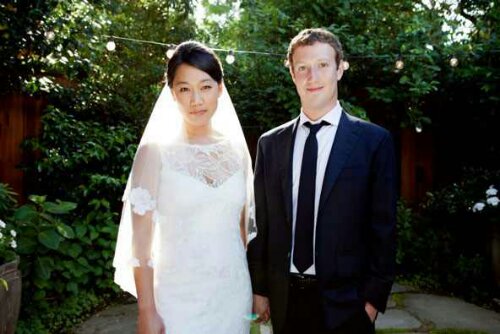 Mark Zuckerberg, the one who founded Facebook back in 2004 from a dormitory in Harvard, is perhaps one of the youngest billionare in this world. His fortunes saw an uprise after Facebook went public a couple of days ago. And finally, the happy day has come when Mark Zuckerberg has changed his Facebook status from single to married.

In a surprise private ceremony at his home in Palo Alto on Saturday, married his long time girlfriend, Priscilla Chan. The wedding came as a surprise to his Facebook subscribers as well, when Mark Zuckerberg changed his Facebook status from single to married accompanied by the image shown above.

Mark Zuckerberg met Chan while attending Harvard, and they have been together since a good long period of 9 years (even before the birth of Facebook).

The marriage took place infront of around a 100 invited guests who were under the impression that they were celebrating Ms. Chan’s medical school graduation. So it came as a surprise to the guests as well.

Zuck is receiving a lot of happy “Congratulations” from his fans over on Facebook. The wedding pic he posted on his Facebook profile has already passed 600,000 likes.

GizmoCrazed - April 4, 2011 1
Check out this amazing quadrocopter tennis match hosted by Zurich's Flying Machine Arena. The robots were outfitted with tennis rackets, allowing them to fly toward the ball...

The Physics of the Invisible Box Challenge