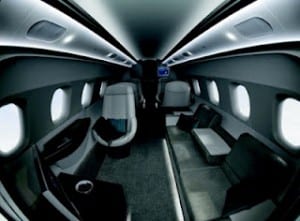 The Embraer Phenom 300 is a light jet aircraft made by the Brazilian aircraft manufacturer Embraer. Its worth is US$ 8.14 million as of 2010. It has a full galley and lavatory with Teutonic, tech-heavy lounge-style cabin with lay-flat seats, convertible tables and muted lighting.

Versace is now designing interiors of aircraft with TAG Aircraft Interiors. They Versace designed interiors are ultra-rich which are custom-made. There is leather seating which is comfortable and stylish. To customize their travelling experience clients work with the Versace team to let them know of their taste and visualization of their concept.

The Airbus A380 is a double-deck, wide-body, four-engine jet airliner manufactured by Airbus. It is the world’s largest passenger airliner. To accommodate its landing, many airports around the world had to expand their facilities. Before being commercialized, it was called A3XX. It received the largest order of aircraft from Emirates. It has been reported that a U.S.-based design company is developing the interior design for the VIP version of this airliner and will term the service as “Flying Palace”. It will have a fully-equipped interior office or board room, a cocktail bar with a super-size TV screen, private dining and relaxing zone with comfortable seating. 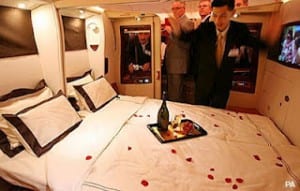 Singapore Airlines’ new First Class is called “Class Beyond First” and also has other reference titles. It has a 35 inch (89 cm) wide seat upholstered with leather and mahogany and a 23 inch (58 cm) LCD screen. The seat can be converted into a flat bed. Singapore Airlines has also announced a new “Super-First” Class on the Airbus A380 double decker. In that, each suite will have a leather seat and a full-sized bed with mattress. 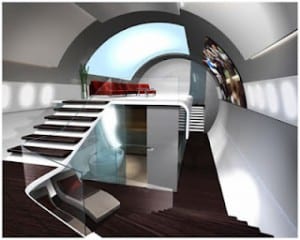 DesignworksUSA has been ordered to create a cabin concept for Boeing BMW called the BWM 787 VIP Cabin. There will be a bar, couches, beds, meeting rooms, stairs, and a parking space for a BMW. There will be semi-translucent walls, residential-style furniture.