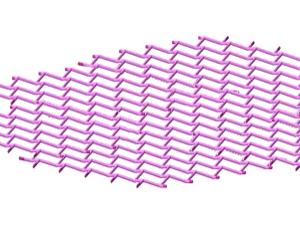 When Graphene was discovered a few years ago it was hailed as the next big thing for the manufacturing of computing and electrical devices, mainly because of its single atom layer of Carbon that is known as the ‘most conductive material in the entire known universe’.

So if Graphene is all this special and great why has not been incorporated yet? Well to put it in simple words, Graphene doesn’t posses the same electrical properties that are needed by these devices, unlike Silicon or Germanium it isn’t a semi-conductor and does not have a gap band therefore it is very difficult to integrate it into usual devices that are made from silicon chips. Additionally, it require it’s semi-conductor nature to work properly.

This where Silicene comes in, scientists at Berlin’s Technical University in Germany, along side researchers at Aix-Marseille University in France have succeeded in condensing a Silicon Vapour on a silver substrate. Through the use of a a scanning tunneling electron microscope it was found out that this created a Hexagonal mesh made up of single Silicon atoms.

It is theorized that Silicene posses the same qualities as that of Graphene but to test that it would have to be condensed and grown on an insulator and as important as this material seems because in a period of 5-10 years we would have used Silicon to its maximum potential, we can only hope that these research groups would find a insulator suitable for its growth by then.

Since China’s Ban, Recycling in the US Has Gone Up in...

SAP agrees to buy Qualtrics for $8B in cash, just before...