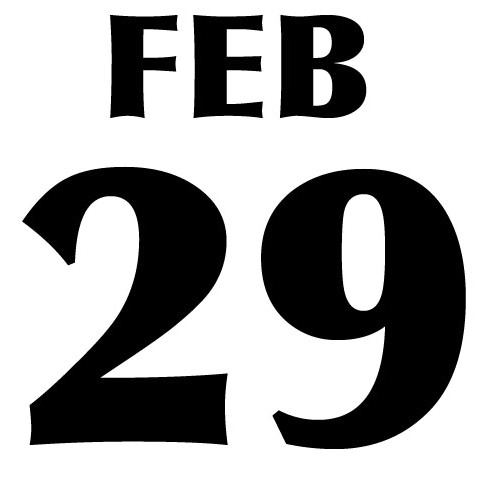 Almost all the calendars, including the Julian, Georgian as well as Hebrew have leap years in them. February 29, which occurs after every four years is called a leap day. It is important to note that the earth does not orbit the sun in precise 365 days, it takes 365 days and six hours for earth to orbit the sun, thereby making it 366 days at the end of four years.

A leap day makes a leap year more interesting no doubt. Following are the top 10 facts about leap year:

The concept of leap year was introduced by Julius Caesar around 2000 years ago. However, he considered any year which can be divided by 4 as a leap year and this lead to too many leap years. Due to this reason, the calendar was later replaced by Georgian calendar.

If the leap day is not a Sunday then it implies that you are working on leap day for free. In all the companies around the world the actual days of working are counted as 365 and not 366. Thus, you need to put in extra effort for one day in a leap year.

Leap years are also said to host some of the biggest sporting events in the history. This year too, you will get to see UEFA European Football Championship and Olympics 2012. Even though there is no correlation between these events and leap year, still they help to make it very special.

Leap years have got many notions attached to it. In Scotland and Ireland it is consider lucky for a female to propose opposite sex, whereas in Scotland tradition, customs suggest that marriage in leap year leads to bad luck.

It is also interesting to note the First Playboy Club was opened on a leap day, i.e. Feb 29th 1960. Since that day, Playboy has become a renowned known all over the world.

People who are born on the leap day usually celebrate their birthdays on 1st March in a common year. There are more than 5 million people around the world whose birthdays fall on 29th Feburary. People born on this day are called leaplings. The chances of being born in this day is just 1/1461.

In various astrology beliefs, people who are born on the leap day are said to possess unusual talents or skills. However, there is no scientific or logical evidence behind it.

Frog is a symbol which is usually associated with 29th February or leap day. This is basically because of the term “leap”.

It’s interesting to note that in the year 1712 Sweden had a double leap year. During that year two days were added to the month of February, i.e., in the history there was a date of 30th February 1712. This was done to bring he Sweden calendar in sync with the Julian calendar.

The Food Digester: A New Way to Combat Food Waste

GizmoCrazed - April 30, 2020 0
Around the world, about 1.3 billion tons of food is wasted each year. This is equivalent to one-third of all food produced for human...

Scientists Turn A Frog Egg Into A Battery