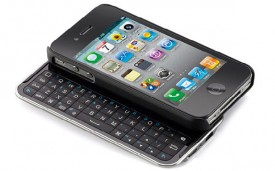 The Verge reports that it was Tony Fadell, the ex-vice president of Apple’s iPod Division who let out the secret of iPhone‘s design considerations during the time it was only a concept. He was there during the first 18 versions of the iPod and first three generations of the iPhone. According to Tony, there were different versions of the iPhone under consideration such as an amalgamation of iPod and the phone, the other version that we all know as the iPhone etc. He said he was personally in favour of the touchscreen only option rather than adding a physical keyboard to the design.

This intuitive and innovative design sure did work for them because soon after its launch in 2007 it became a huge success and from then onwards every company followed in Apple’s footsteps when it came to the design of their own touch operated smartphone, simple, sleek yet efficient was the key to success. But what do you think if iPhone came with a physical keyboard, would it still be a winner? Let us know in comments.

10 Fascinating Facts About Our Solar System

GizmoCrazed - June 11, 2013 1
Our Solar System is the least mysterious known parts of the universe to us, but that doesn’t mean there aren’t things we are still...

Facebook allows advertisers to target you based on your shadow profile