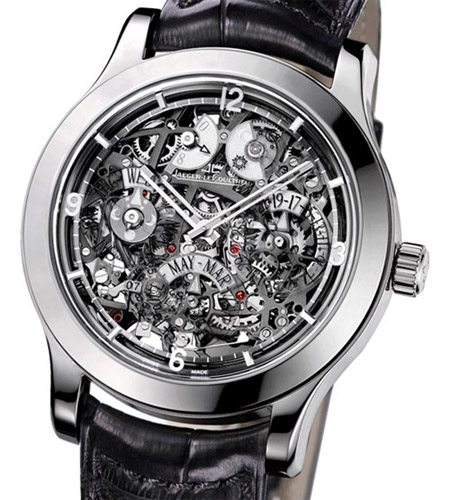 The study of timekeeping is known as horology. Till today, watchmaking has been considered as an art and a skilled profession. Most of the branded wrist watchmakers are based in Switzerland with most famous wrist watch brands are often worn by high-ranking public officials, celebrities, fashionistas and royalty. Here is a list of top ten best wrist watchmakers in the world.

Jaeger-LeCoultre is a luxury watch and clock manufacturer which is based in Le Sentier, Vaud, Switzerland that was founded in 1833 by Antoine LeCoultre. Before becoming an independent company in 1996, Jaeger-LeCoultre used to supply movements and parts to other watchmakers in Switzerland. The Atmos mechanical clock, which does not need to be wound, is made by Jaeger-LeCoultre. The clock can work perfectly accurate without any human help to correct it with the assistance of atmospheric changes to update its time.

Franck Muller is a famous Swiss watchmaking company that has been named after its founder. The company started in 1991 is based in Geneva, Switzerland. The slogan that the brand uses is very interesting. It says “Master of Complications”. Though time itself is complex entity and to capture its essence, the slogan goes with it. Also the timepieces which Franck Muller creates are known for their complications. Many of the celebrities have been known to wear the watches made by Franck Muller. The brand has modern styling with traditional Swiss watch manufacturing and thus matches well as an accessory. Franck Muller claims to design the mechanism of every watch himself personally. He drew early inspirations from Patek Philippe.

Girard-Perregaux is a luxury Swiss watchmaker that was founded in 1791 and is based in La Chaux-de-Fonds, Switzerland. It is amongst the world’s oldest Swiss watchmaking companies. All of their watches are made inhouse, with watchmakers, movement decorators, engineers, polishers and others. The Girard-Perregaux Museum has a selection of old watches and documents that record their history of watchmaking to the present time.

Vacheron Constantin is a Swiss manufacturer of luxury watches which was founded in 1755 by Jean-Marc Vacheron. It is considered to be amongst the finest Swiss watches and one of the oldest in the world with a continuous history of watchmaking. Many of the historical figures, including Napoleon Bonaparte and Harry Truman used to wear a watch made by Vacheron Constantin.

TAG Heuer is a Swiss luxury watchmaking company, which is famous for sports watches and chronographs, which is a stopwatch. The company motto is “Swiss Avant-Garde Since 1860” and it was founded by Edouard Heuer. Its watches are known for their fineness and top quality. TAG Heuer watches are liked by celebrities, fashionistas and also mostly by sportsmen, especially the automobile racers because of speed accuracy and timing.