Much speculated date of 7th March for iPad 3 unveiling  was finally confirmed when the Cupertino based company sent out press invites for a special launch event to be held on the said date. By now we are all aware that the event might see the unveiling of Apple’s third update to its iPad product line, based on all the hearsay that has been going around for a long time.

So before the final unveiling we thought of providing a round up of all the rumours we have had for all of our readers to develop their own predictions about the device and the event itself. 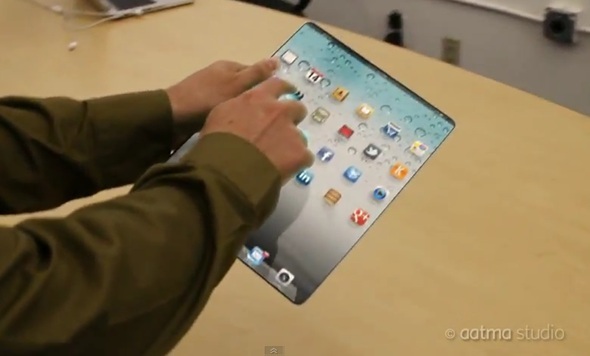 The most talked about feature that we are quite confident would be on the actual tablet once its launched is the Retina Display. We have covered many reports about it which suggest that Apple wants to up the game by launching a display that matches the supposed resolution of a human eye. Meaning, when the resolution 2048×1536 is packed into 9.7″ the pixel density per inch increases so much that it becomes impossible to single out a pixel on the screen and in Apple’s terminology such a screen is called Retina display.

Moving on to the processor, earlier we heard reports of a dual core A5x processor to be integrated into the latest slate but recently rumours of an A6 processor being used for the tablet have surfaced, and it is uncertain which of the two processors would be used in the actual iPad.

We were also given an insight about the shape and design, with the most weird piece of speculation suggesting an edge-edge design with no home button, as we said in an earlier report that the invitations to the press contained an iPad design with no home button on it. In other rumours we saw pictures of leaked parts that showed a thicker and tapered edge body with bigger camera hole suggesting both an improvement in cameras and battery.

Then there were rumours of Siri support and 4G LTE technology being incorporated into the latest version. We have also discussed the probability of Apple launching another device alongside the new iPad and we reckon it would be the Apple set top TV box which has seen no upgrade for more than a year and its about time that the company brings out a fresh model.

All in All, nothing is certain till the actual moment, but that doesn’t stop us from predicting what would be there and what not, so be there on Wednesday, 7th March,10 a.m. PST, to witness the moment live with GizmoCrazed.