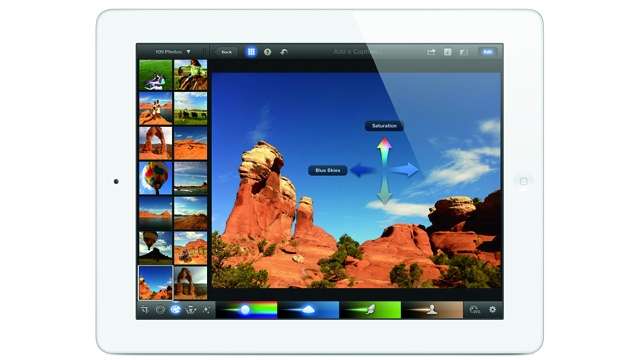 Seems like Apple wasn’t only concentrating on revamping the hardware for its new tablet but was busy tweaking the software too. What fun would it be if the available software can’t match the upgraded hardware in performance.

Apple demonstrated the new features and upgrades it made to these apps that include iPhoto, iMovie, iWorker, Garageband etc. It is certain that the company doesn’t want to sell and market its latest tablet solely on the basis of hardware improvements and have top notch software in the store to boost user productivity.

Firstly, the iPhoto comes as a blessing to those who love to make quick edits and are not to be bothered with complex details. It also comes at the time when Adobe is to introduce Photoshop touch and would do a great deal of damage to them as the new layout in iPhoto is eye catching and you can edit photos by the simple stroke of your fingers that act as editing brushes. Features like auto level , that can figure out the horizon line in your photo and then intelligently straighten up your snaps are going to gather great deal of attention. Users can now just touch the areas of photos to correct the saturation, white balance and contrast of the touched area. While workers can use it to add notes, captions and Geotagging to photos all the while the app brings out historical data such as weather forecasts and maps related to your photos.

Furthermore the app lets users directly beam photos to their iPhones or stream them live at 1080p resolutions on their Apple TV through air play, pictures can also be easily pushed onto the web through iCloud and a new feature called Journal. Apple says the software can handle photos of upto 19 Mega-pixels. Improvements have been made to make better use of multi-touch gestures and the high resolution Retina Display, user can now use touch gestures to compare photos side by side and flag the best shots, they can use pre-defined enhancement tools such as auto-crop, auto-level, bezel gestures, effects, exposure adjustment etc. The app has been made available today at $4.99

In addition to the Retina Display there is huge improvement in recording as well and 1080p clips can now be captured hence an improved iMovie app was deemed necessary, the new features let you make trailers and create story boards even while recording. It packs some new and advanced editing tools with music exclusively recorded for Apple. You can upload your fancy movies to Youtube, Facebook, Vimeo and can directly stream them to your Apple TV at 1080p resolutions with Airplay.

Garageband, another iLife app, now lets you team up with three of your other friends who own an iDevice and make a four member band through the Jam session feature. Once the jamming session ends, tracks on each iDevice are automatically uploaded to your device to edit and mix later on. It has also introduced a new virtual instrument called the smart strings that lets users play an entire strings orchestra with only one finger. Not enough? The New note editor lets users fine tune their touch instrument recording unlike before where users had to play the whole track again from scratch.

Last but not the least, iWork improvements are specifically targeted at the Retina Display that let users draw 3D charts and other models to make the most of this high tech display. Its individual apps Keynote 1.6, Numbers 1.6 and Pages 1.6 will be available for $9.99 or free for those who own the previous versions.

Steam Power: Still Moving Us, Even in the 21st Century

GizmoCrazed - June 27, 2019 0
We live in a civilization powered by steam. Most of us don’t notice its role in keeping the lights on, but steam power is...