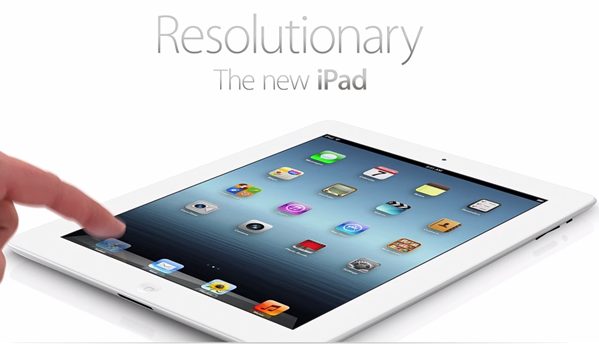 Apple has finally unveiled its third iteration for the iPad product line and as expected it packs almost all the rumoured features especially the much anticipated Retina Display. The screen now packs an astounding 2048×1536 resolution, a million more pixels than your average HD TV display.

The pixel density then reaches round about 264 ppi meaning that it would be impossible to single out a pixel in the display when viewed from a distance of 10 inches. Users need not worry about existing apps coping with such a huge increase in display quality, Apple has optimised its stock apps and is encouraging developers to do the same so they may exploit the display to its complete potential. All existing apps would be able to take advantage of the upgraded display as Apple uses a standard Retina Moniker.

Then they have gone berserk with the camera improvements, there is a 5Mp camera on the back that consists of lens and sensors borrowed from the iPhone 4s. The video recording is a dazzling 1080p , which is intense by iPad standards. This has upped the iPad’s game in the tablet market as no other competitor offers a stabilized 1080p recording with an illuminated 5MP rear cam. The camera is nicknamed iSight and provides the same capabilities of Auto-exposure, Auto-Focus and backside illumination.

Coming to the processing department, our previous expectations have been surpassed as the new iPad has a quad-core A5x processor which the company claims to be four times faster than tegra 3. Apple has added complete 3G functionality with 42Mbps HSPA+ and 4G LTE is also integrated but the LTE models will be seperated for Verizon and AT&T although both models would contain 3G capability. It also acts as a hotspot for upto 5 devices.

Battery life isn’t as improved as we wanted it to be , the company claims it will run for upto 10hrs with 3G and upto 9 hrs on 4G. Voice dictation has also been added to the set, with a microphone icon present in the keypad that works with several languages. Check out pricing/availability/preorder details here.