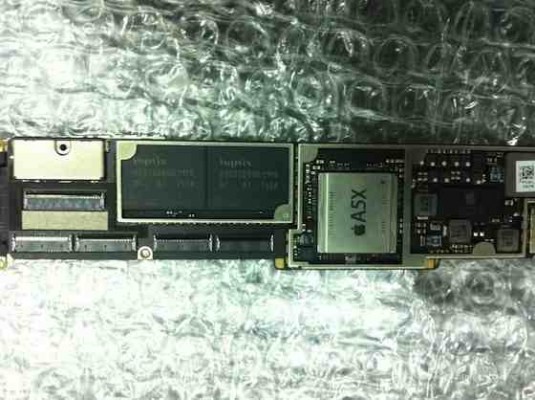 For months now , iPad 3 rumours are making headlines from leaked pictures to alleged features to purported release dates. Although most of the experts agree upon release date of 7th March and features like better battery, improved cameras, 4G LTE technology, Retina Display but the point of conflict is the processor chip. It is not certain whether it will sport a quad core A6 chip or the dual core A5x processor.

Steve Mullane of BlueFin Research Partners and AllthingsD have brought out information that suggests a A5x chip to be integrated in the upcoming tablet once it is finally released. Earlier, we had seen pictures showing leaked iPad 3 parts with an Apple A5x chip but it could not be said for sure if the chip was destined for the new tablet or another Apple product such as the next gen Apple Tv.

Mullane says that he is certain of chip developer Samsung’s capabilities and the company is incapable of producing 28-nano-meter core chips. On the other hand 9to5 Mac’s Mark Gurman reported that the company is actually working on both processor models and it is suspected that iPad 3 would feature the A6 chip while the A5x processor is being developed for the Apple TV product rumoured to be announced alongside the tablet in March.

In conclusion everything said is based upon speculation and hearsay, what the new iPad would actually sport can only be said once it arrives on the shelves but do let us know what you think of both the chips and which one do you want to see in the final tablet.

Can Science Keep Deep Sea Miners From Ruining the Seafloor?

GizmoCrazed - December 20, 2017 0
Ocean explorers and entrepreneurs have been thinking about how to scoop up mineral-laden deposits on the seafloor since the HMS Challenger dragged a few...

Solar cheaper than coal in India

Cloning's Long Legacy — And Why It'll Never Be Used on...

Practice mindfulness with these 3D puzzles and leave your phone alone...