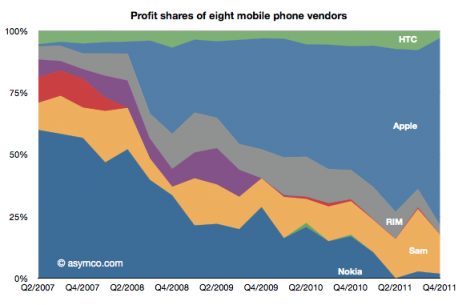 It’s the time of the year when companies release their quarterly earnings. Today, 1st quarterly reports of one of the most speculated companies of all (read Apple) was released. The earnings are pretty handsome looking for Apple with new record being set in terms of quarterly profit in last quarter churning in total sum of $46.33 billion where $13.06 billion was profit made by the company which is 75% of the total profits made.

These profits made by the company derived from their trademark phone Apple iPhone’s sell with 37 million iPhone’s being sold in the last quarter meaning an increase of sale by 128 percent over the same period of time last fiscal year.

These amazing figures have stunned experts. These amazing numbers have taken Apple back into the number one slot replacing Samsung in terms of selling mobile phone units. Samsung sold 35 million units as compared to Apple’s 37 million. Of the total revenue, 24.4 billion came from selling iPhone and its accessories.

The company expects to have even better earnings in 2nd quarter with some more amazing product like iPad 3 to launch during the said quarter. With 8.7 % grab over the mobile phone market and an emerging grasp over the tablet world Apple is all set on their way to be on top for long.

Profit shares of leading 8 mobile manufacturers are shown in the following chart.