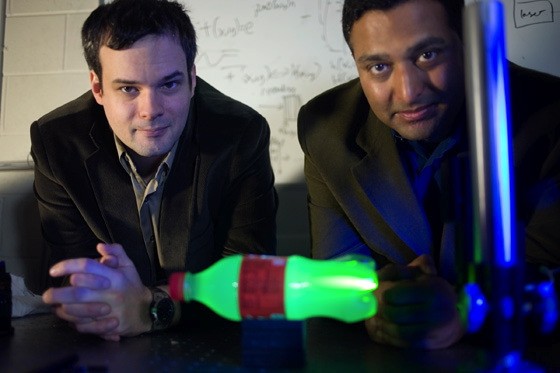 Capturing scenes using cameras is cool, capturing bullet speeding through its way off is super cool, but what about capturing the light itself and view what is round the corners of a room?? No words eehh..

After seven decades of creating a snap shot of a bullet stopped in flight while piercing an apple, scientists at MIT media lab are now working on finding ways to capture the light itself, which ultimately will result into a picture seized in only less than two trillionth of a second.

This project to develop an ultra-fast imaging system was initiated in the first place to imprint images coming from the rooms or the sides of the room which are invisible otherwise. This will be made possible by capturing reflected light and then measuring its return path, making us able to literally see around corners.

The project was a big risk to take at first, such that his colleagues advised him to secure his tenure first, tells Ramesh Rasker; an associate professor of Media Arts and Sciences at Media lab. Since he has his occupancy secured now, so he is leaping into this crazy stuff.

Dr.Rasker and his team are collaborating with their colleagues in Chemical department to customize the “streak tube” for this project. The tubes are fast to the extent that they can track the progress of the packets of laser which are fired into a bottle filled with a cloudy fluid. These tubes work as intensifying agents for the stream of photons to be build up into the stream of electrons.

It is basically a lab instrument for analyzing phenomenon that come to pass in pretty short time frame. But it gives an output in the form of data about the intensity, wavelength and other quantities related to waves, and not as an image as many would have expected.

But after appropriate modification, researchers expect that the tube will enable them to create slow motion movies screening what all the bullet of light went through while traversing its path from the bottom to the top of the bottle.

Streak tube in way is similar to the cathode ray tube. The former works with the light in the same way as the later does with the images as it paints on the inside of the computer monitor. The tube scans and captures the light while each ray is exposed for only a trillionth of a second. This time is quite sufficient for the beam of light to traverse a path of one millimeter inside the bottle.

Creating a movie isn’t an easy task in itself. For a single one, the researchers will have to make 500 frames in only a billionth of a second and repeat the process as each movie has a very narrow field of view. The movie will be composed of the scene of the laser beam moving from the bottom of the bottle, till it bounces off the cap scatters inside. With the time frame so short, a bullet would have taken three years of a movie to get recorded completely.

It can be thought of as a slow motion video showing the fastest phenomena of the universe, the light itself. Researchers are of the opinion that the technology will open doors for further promising commercial application, one of them being the CAT scan as researched by one of Dr.Rasker’s disciples.

He also predicted a smart phone using this technology and building app for the user to check for the fruits in the market: whether they are ripe or not.

Many research teams are currently working on ultra-fast imaging using picosecond speeds. For Dr.Rasker and his team, the project is more than just scientific research. As he puts it:

We were inspired by looking at the world in a unique way just because we could, We’re still trying to get our heads around what this means. Because no one has been able to see the world in this way before.

GizmoCrazed - February 16, 2018 0
(Credit: Adam Hartman/U.S. Navy) Darting spaceships. Dazzling lasers. Fiery explosions. All of these are things that a war in space would almost certainly not involve. Ever...