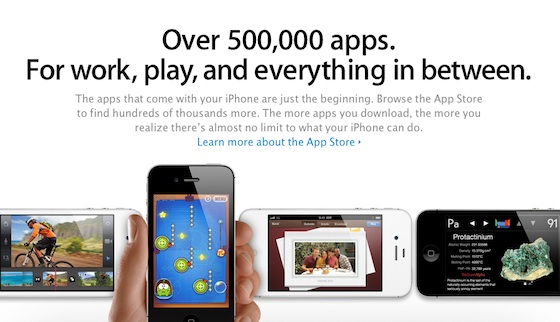 App Store is the best place to find an app for almost everything. And now the number of apps in the App Store have to reached to 500,000 and the number of times these apps have been downloaded has reached to 18 billion. That is really a big number!

Apple announced it today in a press release with another announcement of 100 million Mac App Store downloads. They revealed that now there are more than 500,000 iOS apps for iPhone, iPod Touch and iPad, and those apps have been downloaded more than 18 billion time — and over 1 billion Apps are being downloaded monthly.

Apple has really been the main source of mobile apps. Before the release of iPhone, there was no concept of smartphones having an App Store, or even the ability to install apps. Apple made the idea of an on-ever-device, integrated-into-the-OS App Store mainstream in 2008 with iOS 2 (iPhone OS 2), it’s become economical, convenient, and reliable, and standard on every other major platform.

After Apple, followed BlackBerry and Android. While some may call this as copying, but it my opinion it can be termed as “keeping up the competition”. And you can see, that the App Store is the most secure and advanced place for apps out their, with still the largest number of apps and games.

How to Maximize Battery Life of Your iDevice

GizmoCrazed - November 19, 2010 1
After buying a new iDevice(iPad, iPhone or iPod Touch) the first thing you will notice is that the battery is running out way too...