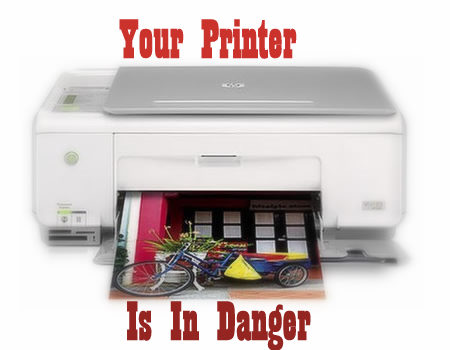 An alarming new report has come to light from a research team in Columbia. According to them, millions of printers accross the globe are prone to a very devastating hack attack. Although it might be hard to believe, but they have discovered that a hacker can control your computer even if he is sitting on the other side of this wide world.

Researchers at Columbia University have claimed they’ve discovered a new class of computer security flaws that could impact millions of businesses, consumers, and even government agencies.

The problem is, technology companies aren’t really looking into this corner of the Internet. But we are. The research on this is crystal clear.  The impact of this is very large. These devices are completely open and available to be exploited.

The most alarming thing is that, not only printers can be hacked from a hacker sitting far away, but the printer can also be caused to set fire to itself.  How this is done, is that a thermal switch shuts the printer down – basically, causing it to self-destruct – before a fire starts. The researchers believe other printers might be used as fire starters, giving computer hackers a dangerous new tool that could allow simple computer code to wreak real-world havoc.

Rewriting the printer’s firmware takes only about 30 seconds, and a virus would be virtually impossible to detect once installed. Only pulling the computer chips out of the printer and testing them would reveal an attack. No modern antivirus software has the ability to scan, let alone fix, the software which runs on embedded chips in a printer

It’s like selling a car without selling the keys to lock it. It’s totally insecure.

This flaw is present in a lot of printers, so addressing this would be difficult. Even Hp’s LaserJet printers are vulnerable to this hack attack and having sold over 100 million LaserJet printers since 1984, a lot of computers are now at the mercy of hackers.

We don’t have any knowledge if any solution to this problem exists or not, but be sure as we will notify you as soon as we get to know a way of preventing this. Hp is also looking in this matter, and has said that they will try to deal with this as soon as possible.

GizmoCrazed - September 15, 2018 0
Makula Dunbar Contributor More posts by this contributor Wireless headphones and earbuds to fit your budget Back-to-college tech for minimalists and the over-prepared Editor’s note: This post was...

Logitech MX Vertical review: Flipping the mouse on its side is...

Sponsored: Top Five IoT Trends in 2016 That You Should Care...