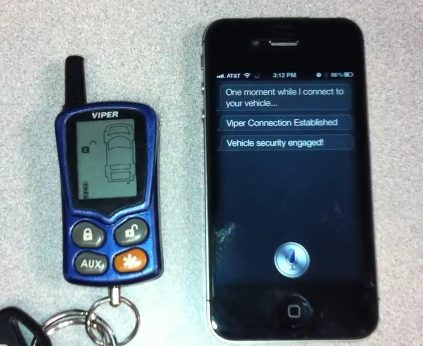 Not only has siri been successful in attracting customers towards the five week old iPhone 4S but hackers are getting their business out of it as well having their eyes on endless range of possibilities.

Last week a hacker calling himself Plamoni was successful in manipulating his 4S to control the thermostat. He made it possible by using protocol hack which enabled him to send and receive Siri commands by creating a proxy server.

While some tried and were successful in hooking up siri to their Viper car remote, one of the perceptive minds have taken up this idea to turn his vehicle on and off by using voice commands through Siri.

Following technical details were given by the hacker on his web page:

The “Siri Proxy” plugin I wrote handles interaction with a php script that runs on my web server. The php script, which I developed months ago for personal use, allows me to send commands to my car which has a Viper SmartStart module installed.

No matter how much skepticism and apprehensive this Siri may sound but Apple has got the credit of introducing the most talked about and remarkable feature out of all their products. Voice-recognitions seems to have a really bright future keeping in view the developments on Siri made in just five weeks only.

Siri has opened way for many possibilities, hitherto supposed by science fictions. As chances speak, future may witness a gadget sensing commands through brain and translating them for Siri. The famous video of Siri trying to settle a marital argument isn’t far from reality now.

Though, due to the typically Apple hardware adjustments found solely on 4S, Siri cannot be fully ported through to the iPhone 4, 3GS or any other iDevice for that matter, but well who know if a hacker finds some way out.

Possibilities and their range for gizmo sphere is well framed and utilized by the hacker buddies.