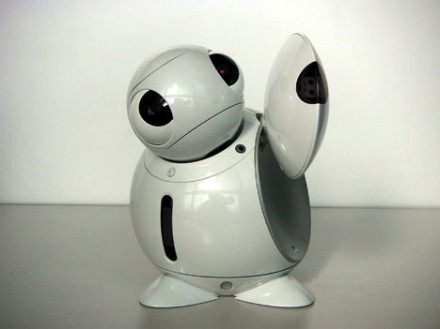 “Helpful Robots”— they aren’t exactly a new concept. After all we have a slew of home-robots designed to aid with household chores, most of which are Japanese-made. While more recently the robots coming out of Japan have been pretty bizarre to say at the very least — there’s a French kiss simulator robot on the market and a miniature robot designed to successfully complete the Ironman Triathlon—a couple of new, innovative Japanese robots under development may just very well revolutionize the way the elderly and disabled are cared for. And with the elderly living longer lives, these robots can definitely come in handy. To see which robots were talking about, continue reading below.

Earlier this month Panasonic gave consumers a peek at a 24-fingered hair-washing robot which is said to relieve caretakers and nurses of some of their duties. At a quick glance it looks like it belongs in a high-end hair salon, but this hair-washing machine is actually meant to assist those who may not be able to keep their tresses clean due to age or disability. How it works: Just like when getting your hair washed and cleaned at a salon, consumers are required to lay their head over a sink. Once in place, the robot fingers get to work and massages-in shampoo, scrubs the scalp, rinses clean, and then repeats the same steps with conditioner all in matter of 3 minutes. The robot even blow-dries the hair. While Panasonic claims the device will be available to hospitals and nursing homes sometime next year, there has been no word of its exact date or its price. The 24-finger robot is an updated version of the 16-finger prototype which can be seen here.

This robot, which is still in its infancy stages, was showcased in late September at the Tokyo Institute of Technology. Its main function is to carry around cargo and act as a “personal assistant,” but creators hope that with some slight modifications it will one day be equipped to help elderly consumers carry around oxygen tanks. How it works: Basically the battery-operated small device follows you around like a little puppy with the help of a chord. Similar in design to a NASA space exploration rover, the robot has four wheels and can travel on rough terrain such as rocks and hills for about 5 km with one charge. Since it is a prototype, there is no word on when consumers can expect to see this robot on the market. But for a demonstrational video of the robot, click here.

Space Photos of the Week: The Case of the Missing Dark...

GizmoCrazed - April 7, 2018 0
We see a lot of space photos each week and they are always beautiful and unique. But some images make you stop and ponder...

Top 10 Weird Laws In The World

Our picks for the best gaming headset under 100