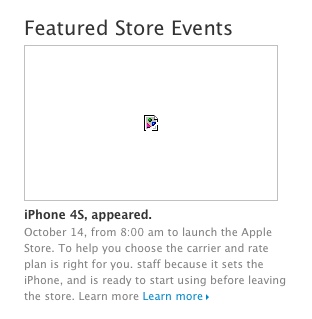 The rumours were indeed true! Apple’s Ginza Japan retail store has just confirmed the iPhone 4S, the release is set for October 14th.

Two images labeled ‘iPhone 4S’ have appeared on the Apple Store servers. The images are fairly interesting — they show what looks just like an iPhone 4 running iOS 5, but the antenna design is the same as the CDMA version and the ambient light sensor is faintly visible on the black model — it’s been invisible on previous iPhone 4 press photos.

It will be announced officially at Apple’s media event which is happening right now in Cupertino. Check out all the latest iPhone news here.

Update: Apple has just made the iPhone 4S official.

-Features will include Apple-made A5 Processor with dual core graphics (up to 7 times faster than in the previous iPhone).

-iPhone 4S has both GSM and CDMA support — making it a dual-mode world phone.

GizmoCrazed - October 19, 2016 0
Understanding the hazards of space weather on crewed and robotic missions is vital to informing plans for NASA’s Journey to Mars and other missions...

Luxembourg Just Announced a Plan to Mine Asteroids — And It...