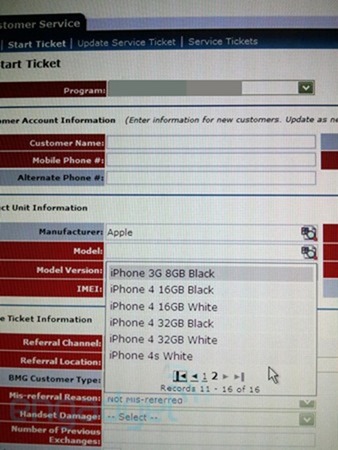 Folks at Engadget have got hold of a screenshot that appears to be a screen of AT&T’s  retail software. Why did they publish it? Well, the screenshot shows Apple’s new device, the iPhone 4S, under model version that almost confirms that Apple will be launching two new devices this fall.

However, to me the screenshot appears to be FAKE. Even though it comes from one of the biggest technology blogs in the world, there are too many unusual things about this iPhone 4s.

Apple usually doesn’t use lowercase letters after the number like ‘iPhone 3GS‘. Therefore, if Apple is going to introduce a new iPhone then the name should be ‘iPhone 4S’ instead of ‘iPhone 4s’.

Furthermore, the Black model usually gets listed first, so why the White version is ahead of the Black in case of 4s? If AT&T gets the iPhone 4s, where’s the iPhone 5?

What do you think? Real of Fake? Let us know in comments.

The Sun Exchange funds solar installations with micro-investments and bitcoin

GizmoCrazed - December 5, 2017 0
Solar power could transform small communities around the world, but remote villages can’t always scrape together the thousands of dollars required to install the...

Data tells us that investors love a good story

Overstock and Coinbase briefly mixed up Bitcoin and Bitcoin Cash