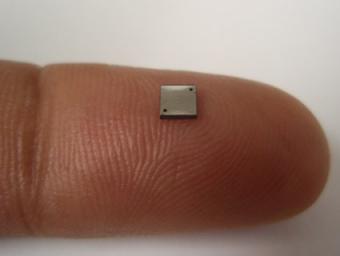 Researchers at the Rice University have developed the world’s smallest battery that is just 150 nanometers in width — makes it six(6) thinner than a bacterium, hundreds of times thinner than a human hair and about 60,000 times smaller than a typical AAA battery.

The tiny battery is actually a cross between a battery and a supercapacitor. Supercapacitors can deliver more power at once than batteries a — bigger jolt. The diminutive battery is made by the thousands in dense arrays. Each battery is a nanowire, with 1/2 of the wire working as a negative electrode and the other half as a positive electrode.

The nano batteries could potentially be used to run small electronic devices such as biological sensors and microscopic wireless networks. They could also enable presence of a small computer in all sorts of devices, which will eventually make them a “smart” object”. How about a Smart Nail-cutter? 😀

While the possibilities seem endless, it is still a lab prototype and still contains some bugs that need to be fixed until a final commercial version is released. Researchers say that battery’s performance starts to diminish after recharging only 20 times, which makes its less efficient especially if you want to put into an implanted medical device.

GizmoCrazed - December 19, 2018 0
Uber has been granted permission by the state of Pennsylvania to reinstate tests of its autonomous vehicles, as first reported by Reuters. A spokesperson for...

New Tech Converts Thoughts to Speech, Could Give Voice to the...