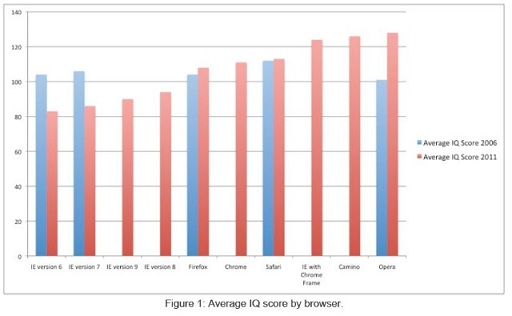 According to a recent study, users of Internet Explore (IE) have a lower level of IQ than users of other browsers such as Firefox, Chromer and Safari. The study was carried out by AptiQuant, a Canadian Company, under the title “Intelligent Quotient and Browser Usage”.

Moreover, many versions of Internet Explorer were included in the study and the results showed that older versions of IE users have even lower level of IQ.

For a long time developers and users are not at all happy with IE6, mainly because of its non-compliance with the web standards and security defects. The recent result could add more agony to the users and the browser.

Individuals on the lower side of the IQ scale tend to resist a change/upgrade of their browsers. Now that we have a statistical pattern on the continuous usage of incompatible browsers, better steps can be taken to eradicate this nuisance.

This may be one of the reasons why Microsoft started a campaign against the usage of IE6 earlier in March. Certainly this kind of steps has to be taken against the less compatible browsers.

GPS Rollover is today. Here’s why devices might get wacky

GizmoCrazed - April 6, 2019 0
The Global Positioning System time epoch is ending and another one is beginning, an event that could affect your devices or any equipment or...