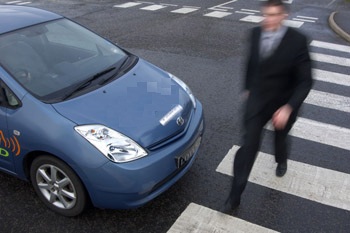 Toyota is going to take the crash-avoidance technology in cars a step further, as the company is currently developing a safety mechanism that will take control of the steering in order to avoid collision, instead of just stopping the vehicle.

How It Will Work?

The new system is going to use front and rear cameras, and a super sensitive radar called millimeter-wave — installed at the front to detect objects(pedestrian or obstacles) that could lead to a crash. The car will automatically calculate how braking and steering must be applied in order to avoid a crash. In this way, if it detects a possible collision, the car will take control of the steering wheel instead of just slowing down the vehicle.

Meanwhile, Toyota is also working on other safety features such as a steering wheel that can measure the driver’s heartbeat and avoid a crash if they suffer a heart attack, a pop-up hood that could provide some additional protection in the event of a crash, and a mechanism to block parts of the rays from high-beam headlights to improve the visibility of the driver at night.

There has been no official word on availability of these features in a commercial model, but according to sources they are ready to be offered soon.

Toyota is aiming for zero fatalities and injuries in traffic accidents. However, the new safety measures is mainly an effort to counter the intensified competition among manufactures — providing something ‘special’ other than the regular features will woo customers. 😉

Now this… this is an ultra-wide monitor

GizmoCrazed - July 20, 2018 0
I’ve been working with an ugly but functional lopsided two-monitor setup for years, and while it has served me well, I can’t say the...

This is how to use the new iOS 11 Files app