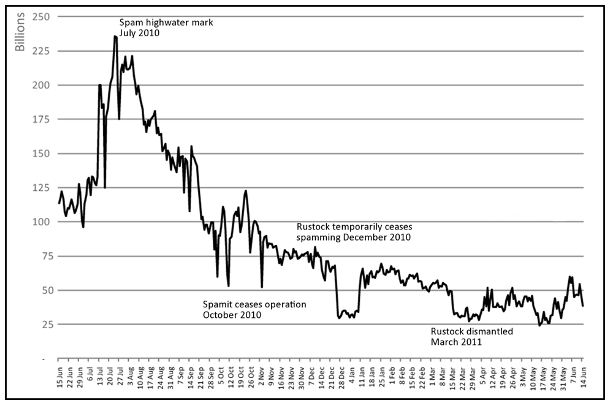 Spamming has always been a problem for people as there is no way to get rid of it, but now the things have changed a lot.

There is a lot of depreciation in the spam as compared to the previous year, according to observation which revealed some fascinating and improved results.

A renowned security journalist and a former Washington Post reporter, Brian Krebs perceives this as a result of “improved and coordinated” efforts by security institutions, and He gives the maximum credit to internet service providers who made it possible to decrease the mass spamming to a very decent rate.

The graph shows significant drops in spam levels occurred when investigators coordinated their efforts and brought down numerous major spam networks such as “Rustock” which was responsible for 40% of all junk email.

A part from this good news, there is something new to worry about for the internet users as a new encrypted type of virus named as TDL-4 has emerged which removes other malwares from PC, by replacing them with itself thus massively breaching  the PC and damaging it. TDL-4 has already effected more than 4.5 million PC’s and the number is growing as each day passes.