Here is some interesting technology news, from the list of available news of the day; Microsoft might be working on the new project named as Tulalip that will come with the tagline of a hybrid search/social networking service. We first got this information from the Fusible and according to this info Tulalip service available on SOCL.com domain and this domain is in possession of Microsoft. If you want to confirm then you need to check the record of socl.com WHOIS on DomainTools. 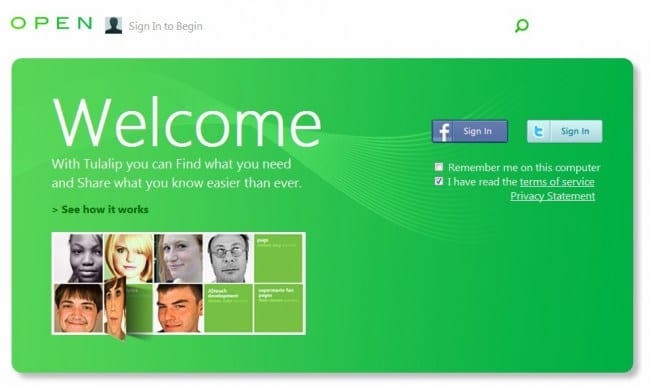 You will be able to see the ready explanation of Tulalip from this “Welcome message”:

With Tulalip you can Find what you need and Share what you know easier than ever.

At the top of page, you can also check the search box — don’t need to search anything as it’s not working at this moment. A mysterious word OPEN follows this search box and increase our curiosity level to a great extent. There is also some non-working links on the page such as “See how it works”, “Terms of service” and “Privacy Statement”.

As it is a so called social networking service so there is no need to get surprised while seeing the Facebook and Twitter Sign-in buttons. However, Twitter button makes one thing clear to us that Tulalip is an “experimental app” from Microsoft Research Centre.

The screen of Twitter authorization clearly reveals that the Tulalip will make it feasible for you to  “Update your profile” and “post tweets for you” — this thing permit us to make an assumption about Tulalip i.e. this service will bring some kind of social networking management tools for us. As there is non-working Facebook connect button so it is quite difficult to explain the real connection between Facebook and this social networking service.

It is possible that this experimental application will be the response of Microsoft for the Google +, launched by Google on June 28th, but we can’t say anything with surety at this point. Evidences are scarce at this moment so it is good to wait and watch because the time clears everything for us.

Update: According to a Microsoft Spokesperson:

Socl.com is an internal design project from one of Microsoft’s research teams which was mistakenly published to the web. The screenshots of websites, which can be seen above, have been removed now.