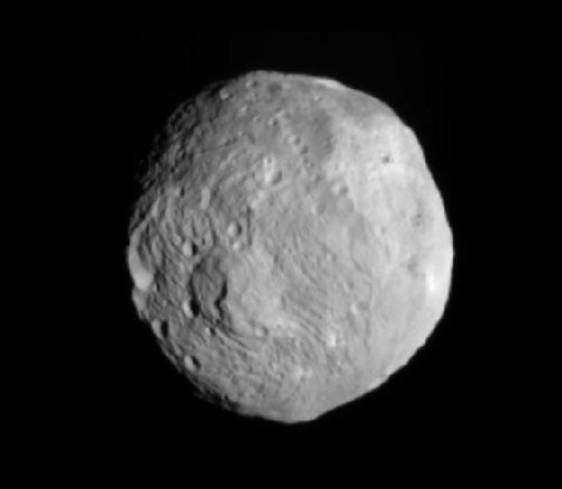 It has been officially confirmed that an unmanned NASA spacecraft, Dawn, which travelled around 117 million miles from Earth has reached the orbit of a huge asteroid named Vesta on Saturday. It is the first spacecraft from NASA to ever orbit an asteroid in the solar system.

After four years of travelling in space, Dawn finally reached the orbit of Vesta where it will spend a year to study the huge space rock (Vesta) before moving onto another asteroid named Ceres.

The Dawn mission was started in 2007 and its budget is $446 million. The main aim of this mission is to explore the largest asteroids in the asteroid belt. Some astronomers consider Vesta as a proto-planet because of its enormous size in width (330 miles) and want to find the reason for brightness of the asteroid through this mission.

Vesta is considered as the brightest asteroid in the solar system and it is almost as wide as an US state, Arizona. It is located at the region of interplanetary space between Mars and Jupiter where usually most asteroids are found — commonly known as asteroid belt.

On Saturday, the spacecraft alerts its controllers in the NASA’s jet propulsion laboratory, California, that it has reached the orbit of Vesta. Yet the exact arrival time of the asteroid’s probe is not yet known, but mission managers estimated that the arrival time would be 10 PM PT Friday (1 AM ET Saturday).

According to them, the arrival time of asteroid is attributed to its mass and gravity. If the asteroid is more massive then the effect of gravity will be more and Dawn would be pulled earlier. If it is less massive then Dawn would take more time to reach its orbit.

Prior To This Mission:

Many missions in the past to reach different asteroids have failed. In 2000, Near-Earth Asteroid Rendezvous Shoemaker (NEAR Shoemaker), a NASA probe, reached the orbit around Eros asteroid but at end of the mission, it landed at the space rock. In Japan’s mission (Hayabusa) the probe which has been sent to collect samples from the Itokawa asteroid returned last year, after the orbits of both the asteroids (Eros and Itokawa) range outside the main belt.

After the success of Dawn, NASA next plans a new asteroid mission called Osiris- Rex and it is set to launch the spacecraft in 2016. It will collect samples form the space rock in 2020 and finally return to earth with the samples in 2023.

At present, the Dawn mission orbiting asteroid is considered as the biggest achievement by NASA.

GizmoCrazed - September 25, 2018 0
The transmission electron microscope was designed to break records. Using its beam of electrons, scientists have glimpsed many types of viruses for the first...

Desalination Is Booming. But What About All That Toxic Brine?