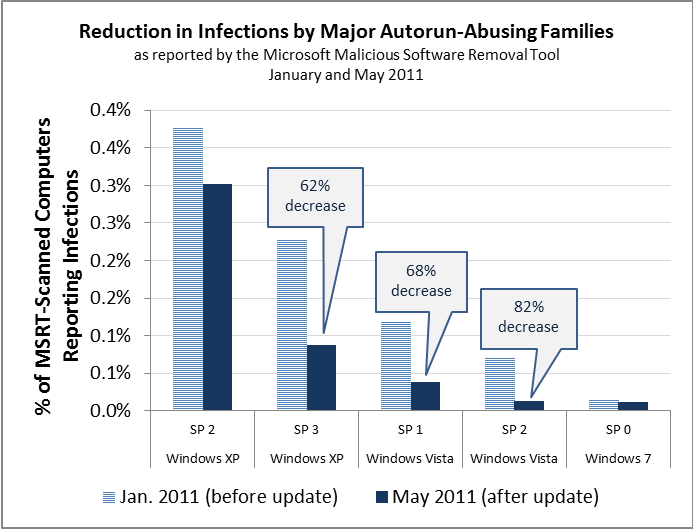 Microsoft’s Malware Protection Center claims that the Windows AutoRun updates for Vista and XP SP3 that Microsoft released in February, has reduced the the number of malware infections by 1.3 million, compared with the three months prior.

Note: There is no reduction in Windows 7 because it already has autorun freezing enabled.

The Autorun Malware used to spread through USBs, Memory Cards and other External Devices using built-in Autorun feature in Windows, which automatically executes a command when the device is plugged in. Therefore, back in Feburary Microsoft decided to disable Automatic Execution via AutoRun to stop spreading of malware.

Microsoft showed its success by comparing the number of infected computers by common Autonrun spread virus families like Taterf, Rimecud, Conficker, and Autorun.

Abusing Autorun was only one trick up their [the malware writers’] collective sleeve. However, judging by the numbers in our data, it was a lucrative one.

Though Microsoft is proud of its achievement, other 3rd-party antivirus companies like Kapersky are still unsure over this dramatic drop, as they found only 15% drop from their statistics.