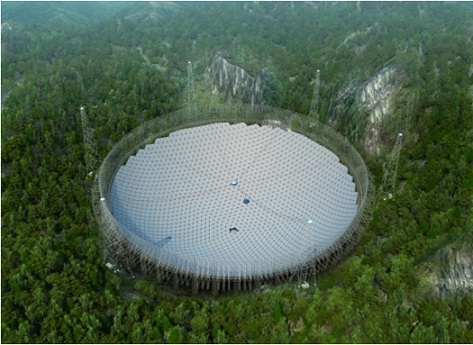 China’s new gigantic radio telescope comprising of a big bowl-shaped radio signal collector, is named as Five-hundred-meter Aperture Spherical radio Telescope (FAST) and it will be operational in 2016 according to the Chinese officials.

FAST is seen as the result of the massive research works of Square Kilometre Array (SKA) that was focused on producing a radio telescope with a complete square kilometre of telescope surface area. It has an amazingly powerful and sensitive receiver fixed above the dish and it will be capable of receiving the activity from 19 sky regions at a time which was impossible with any of the telescope before.

FAST is using the architectural designs of Arecibo but it will be three times more capable than the previous largest telescope “Arecibo”.

This is possible because of the advanced and sound internal engineering of FAST. With overhanging mirrors weighing 11,000 tons and aluminum panels inside the structure of these mirrors, FAST will be capable on focusing on the radio signals and the magnifying effect will be enhanced with subsets of the mirrors.

With the ability to detect the extra planetary activity from the distance of 1,000 light years, FAST is highly seen as a tool that will definitely enhance further horizons of research and success in the space industry and benefit the humankind. It is also expected to join SETI in the search for extraterrestrial life.

In Automation, the 'Last Motion' Will Come Before the Last Mile

World’s 10 Most Dangerous Countries To Visit In 2012