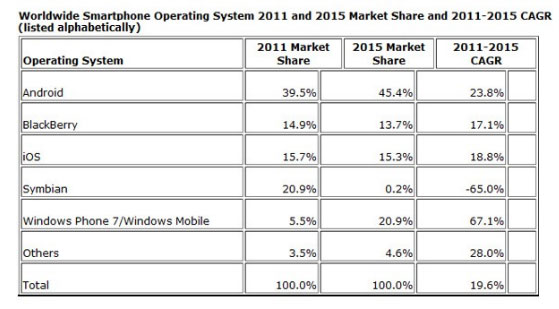 The market shares of different smartphone platforms have also been predicted by IDC, according to which Android will take lead with 45.4%, followed by WP7 with 20.9% and iOS with 15.3%.

Surprised by WP7’s second spot? Well, this impressive growth is definitely possible because of Microsoft’s partnership with Nokia. What do you think about these predictions by IDC? Lets us know in comments.

29 Mar 2011
FRAMINGHAM, Mass. March 29, 2011 – The worldwide smartphone market is expected to grow 49.2% in 2011 as more consumers and enterprise users turn in their feature phones for smartphones with more advanced features. According to the International Data Corporation (IDC) Worldwide Quarterly Mobile Phone Tracker, smartphone vendors will ship more than 450 million smartphones in 2011 compared to the 303.4 million units shipped in 2010. Moreover, the smartphone market will grow more than four times faster than the overall mobile phone market.

“Overall market growth in 2010 was exceptional,” said Kevin Restivo, senior research analyst with IDC’s Worldwide Quarterly Mobile Phone Tracker. “Last year’s high market growth was due in part to pent-up demand from a challenging 2009, when many buyers held off on mobile phone purchases. The expected market growth for 2011, while still notable, will taper off somewhat from what we saw in 2010.”

To capture the strong consumer demand for smartphones, manufacturers have unleashed a steady stream of new models and features over the past two years. The battle for mind and market share has also resulted in stiff competition among the smartphone operating systems.

“Android is poised to take over as the leading smartphone operating system in 2011 after racing into the number 2 position in 2010,” said Ramon Llamas, senior research analyst with IDC’s Mobile Devices Technology and Trends team. “For the vendors who made Android the cornerstone of their smartphone strategies, 2010 was the coming-out party. This year will see a coronation party as these same vendors broaden and deepen their portfolios to reach more customers, particularly first-time smartphone users.”

Nokia’s recent announcement to shift from Symbian to Windows Phone will have significant implications for the smartphone market going forward. “Up until the launch of Windows Phone 7 last year, Microsoft has steadily lost market share while other operating systems have brought forth new and appealing experiences,” added Llamas. “The new alliance brings together Nokia’s hardware capabilities and Windows Phone’s differentiated platform. We expect the first devices to launch in 2012. By 2015, IDC expects Windows Phone to be number 2 operating system worldwide behind Android.”

GizmoCrazed - May 22, 2012 0
Facebook has a reputation for implementing new features every now and then, without caring about the love or hate it receives from over 800...

The Physics of Projectile Motion With a Clicky Pen