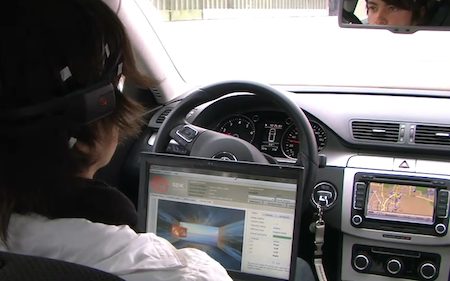 A group of researchers at the AutoNOMOS Labs in Germany have developed a system by which a person can steer a car with his mind. Building a mind control system requires developing a computer program that reads electromagnetic signals from a set of sensors worn by the driver. The project has been named the “BrainDriver“.

The same group of researchers had previously built autonomous cars and vehicles that could be controlled with an iPhone/iPad.

“After testing iPhone, iPad and an eye-tracking device as possible user interfaces to maneuver our research car, named “MadeInGermany,” we now also use Brain Power. The “BrainDriver” application is of course a demonstration and not roadworthy yet.”

The research team told IEEE Spectrum that the system could be paired with an autonomous taxi system; passengers could deliver directions simply by thinking them. This type of non-invasive brain interface could also allow disabled and paralyzed people to gain more mobility in the future, similarly to what is already happening in applications such as robotic exoskeletons and advanced prosthetics.

There could be some downsides, as it’s not easy for a person to control his/her thoughts.

There’s still a lag time between the driver’s thought and the car’s reaction — precision of the system will be tough job for sure!