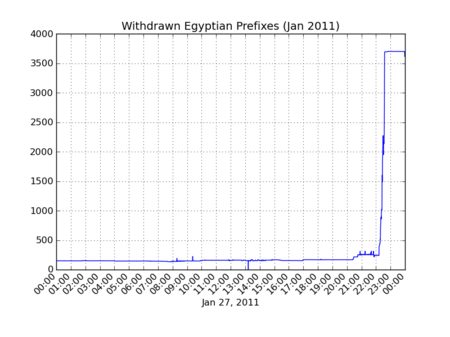 Yesterday, in an action never done in Internet History happened, Egyptian Government ordered to switch off the internet. The shutdown down wasn’t a hard task for the government. They simply ordered the Internet Service Providers(ISPs) to shutdown their service. Under Egyptian legislation the authorities have the right to issue such an order and service providers are obliged to comply with it.

“What is most likely is that somebody in the government gives a phone call to a small number of people and says, ‘Turn it off.’ And then one engineer at each service provider logs into the equipment and changes the configuration of how traffic should flow.”

Over 3500 BGP routes or Border Gateway Protocol which is used where networks interconnect, enabling ISPs to “announce” what IP addresses they are responsible for and exchange traffic accordingly, disappeared in an instant after the shutting down of the services.

“At 22:34 UTC (00:34am local time), Renesys observed the virtually simultaneous withdrawal of all routes to Egyptian networks in the Internet’s global routing table. Approximately 3,500 individual BGP routes were withdrawn, leaving no valid paths by which the rest of the world could continue to exchange Internet traffic with Egypt’s service providers. Virtually all of Egypt’s Internet addresses are now unreachable, worldwide.”

With no BGP routes into or out of Egypt, the internet simply doesn’t work. This is more effective way of blocking internet than turning off DNS because users can also use overseas DNS to access the internet.

According to Renesys statistics, 93% of Egyptian’s networks were unreachable as of last night. Noor Group is the only ISP still serving its customers. It is not clear why they did not get turned off, though experts are saying they are alive because they are the service providers for the Egyptian Stock Exchange.