2. The First AuctionWeb Logo Was Called the “Death Bar”

“The boxy black-and-white AuctionWeb logo … was so sinister the eBay staff had taken to calling it the ‘death bar,’” according to Adam Cohen in The Perfect Store: Inside eBay, a book explaining the story of eBay. Above you’ll find the original logos for AuctionWeb and eBay Internet. Steve Westly, one of eBay’s founding executives thought it was so horrible that it was scaring away potential corporate partners. You can see why employees might go a little bonkers after staring at these logos every day.

For a short period in 1997, the eBay logo was changed to a slightly more appealing navy blue design, as pictured above. It is difficult to find a trace of this logo on the Internet, as it wasn’t in use for very long and may not have ever existed on the website itself. One of the only places that it still exists is on an eBay listing posted by Jim Griffith, the first customer sales representative at eBay and the current host of eBayRadio.

Griffith’s listing described a stack of eBay brochures and stickers that he found in a trash bin at the eBay office. He included a detailed photo as well, watermarked with his seller name, uncle_griff. Upon finding the items, he couldn’t bear to see history tossed away, so he saved them and later sold them on eBay to benefit one of his favorite charities, The Disabled Online Users Association. In his listing, he commented on the blue logo design as:

“…one that didn’t last more than, well, probably a week if my memory serves me. And thank heavens for that! Can you imagine what eBay might have become with such a boring old logo? Still, it could have happened….”

Luckily, in 1997, the company hired CKS Group, an ad agency owned by Bill Cleary, Mark Kvamme, and Tom Suiter (all three of whom had previously worked at Apple Computers), to revamp their corporate identity, including visual imagery, typography, the website, and recommendations on advertising. 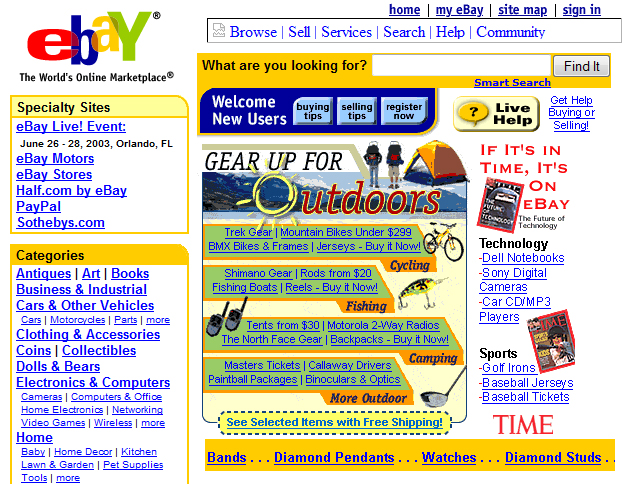 Cleary who at the time led the graphic design team that created the eBay logo, about the rebranding process and the idea behind the logo design. He elaborated:

Inspired by the visual imagery behind Eastman Kodak and Apple, among other brands, Cleary and his team created a logo that would appeal to the masses. The final result was the multi-colored logo spelled e-b-a-Y in overlapping letters with baseline shifts. The logo was chosen out of five or six other designs and had the “friendly, open and accessible” personality that the eBay team was looking for. 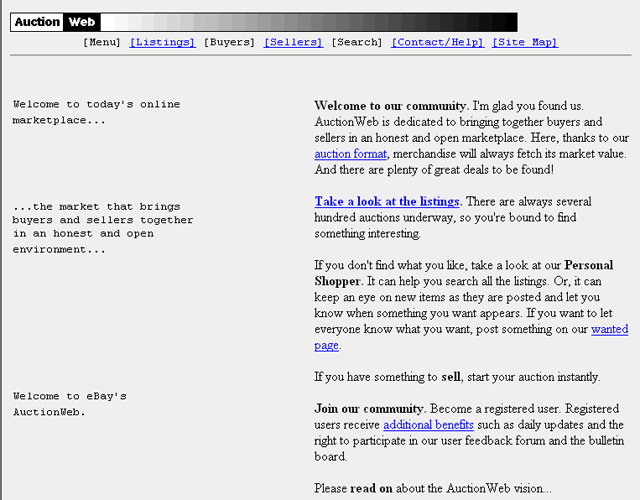 The site we now know as eBay was launched during Labor Day weekend in 1995 as “AuctionWeb,” by entrepreneur Pierre Omidyar in his living room in San Jose, California.

AuctionWeb was just one of four sites housed under Omidyar’s umbrella company, eBay Internet. The other three included a travel site set up in loose partnership with a local San Jose travel agent, a personal shopper site, and a site about the Ebola virus. Check out the screenshot above of AuctionWeb, circa 1997.

The decision to change the name from AuctionWeb to eBay was made by Omidyar and Jeffrey Skoll, eBay’s first full-time employee and president, in mid-1997. The change was spurred by the fact that most customers referred to the site as “eBay,” and the initial media coverage, though sparse, also used “eBay” more than “AuctionWeb.” The actual name change took place in September of 1997 and involved a migration of existing users to a completely new platform with a more graphical website and home page. It also introduced the world to the multi-colored eBay logo we know today.

So, where did “eBay” actually come from? Long before AuctionWeb existed, Omidyar went to Sacramento to register the domain echobay.com for his planned business name Echo Bay Inc., but it was taken. He came up with “eBay” on the spot and registered it instead.

Did we leave any interesting facts about eBay off of this list? Let us know what you would add in the comments below.

GizmoCrazed - October 8, 2015 0
Solar energy dates back to the beginning of time. Its uses are incredible, then and now. In 700 BC, there were sunlit fires. In...