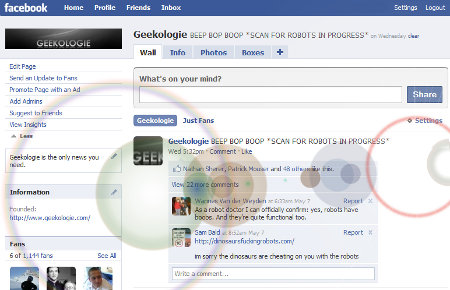 Facebook is no stranger to Easter eggs. Early on, mysterious movie-related references (apparently Zuckerberg is a big film buff) could be found littering the site.

The references could be found in the footer of the old “Friends Page” in 2007, and one of the first was a quail-themed quote from the film The Wedding Crashers. Later dubbed “quails,” other quotes with the avian theme continued to appear in the footer text, including “Only the craftiest of quails survive hunting season,” and “What doesn’t kill a quail only makes it stronger.”

In addition, Facebook once boasted a Konami Code (you know — up, up, down, down, left, right, left, right, B, A, enter) that changed the background of the site to display colorful circles and light flares.

Finally, there’s the “Chris Putnam,” a Facebook Chat Easter egg that still works today. To test it out, when in chat type in :putnam: and hit enter. 😀

Many of you may know about Facebook’s initial staggered rollout, where they started with Ivy League colleges before encompassing other educational institutions. But do you know who Facebook first went corporate with in terms of official work places?

In May 2006, Apple and Microsoft were among the first, as was Intel, EA and Amazon. Others in the first round also included Accenture, Gap, Intuit, Pepsi, PricewaterhouseCoopers and the non-profit organization Teach for America. It wasn’t until September 2006 that everyone, regardless of school or company affiliation, could join Facebook — and just over a year later the site hit 50 million active users.