How many Facebook friends do you have? To put your friend count in perspective, the average user has 130.Facebook’s official stats page is full of little gems like this, and more staggering stats, such as the fact that people spend over 500 billion minutes per month on Facebook, while the current active official user count now stands at over 500 million.

As far as Facebook the platform goes, over a million websites have integrated with Facebook, and more than 150 million people engage with Facebook on external websites every month.

5. The Meaning of the Term Poke Has Never Been Define 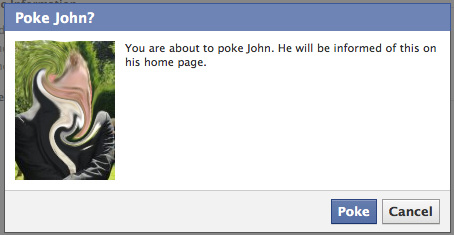 While Facebook explains how “poking” works on its help center, there’s no explanation to be found for the origin of the phrase. The most common definition is a friendly “nudge,” but the more flirtatious connotations cannot be ignored.

David Kirkpatrick reveals in The Facebook Effect that Zuckerberg once responded to a question about what a poke meant on the social networking site with:

“We thought it would be fun to make a feature that has no specific purpose… So mess around with it, because you’re not getting an explanation from us.”