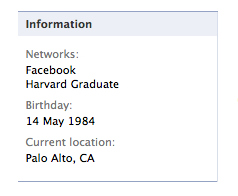 As you can see for yourself over at facebook.com/zuck, Mark Zuckerberg tells a little fib on his profile page. He lists himself as a “Harvard Graduate,” which simply isn’t true, as he dropped out to concentrate on getting Facebook up and running.

When a reporter confronted Zuckerberg with this little inconsistency, he said:

“That’s true. We don’t have a setting for dropout.”

7. There’s an App to See What’s on the Facebook Cafe Menu

Like at Google, Facebook staffers get three free meals a day (as well as free drinks and snacks) served up by the “Facebook Culinary Team” at Cafe X or Cafe 6.