Google’s first ever Twitter post was as satisfyingly geeky as you could hope for. The message, sent in February 2009, reads:

For anyone not fluent in binary, here’s a hint — it’s a well known phrase from the company’s homepage. Got it? Yep, it reads:

3. The First Google Storage Was Made From LEGO 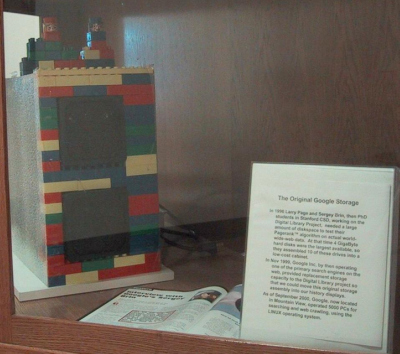 As proud hosts to Google back when it was still a research project, and known as “BackRub”, here Stanford now showcases the original Google storage from way back in 1996. It’s made up of a whopping 40 GB (less than a modern iPod) and it’s made from, as fans of the building bricks will be delighted to see, LEGO. It even hash funny mini-figures on the top.

Legend has it that the reason for the LEGO construction was that the Google guys needed an easily expandable, and cheap way to house 10 4 GB hard drives, and LEGO fit the bill. Whether the primary colors of the bricks used were the hues that went on to inspire the Google logo’s design is up for debate, but we’d guess it wasn’t just a coincidence.